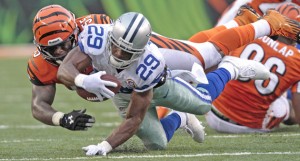 PHILADELPHIA (AP) — A midweek trip to Philadelphia should keep the Cincinnati Bengals from focusing on another Pennsylvania team for a few more days.

The Bengals (7-6) find themselves in a unique position where they’re tied with the Pittsburgh Steelers for the last playoff spot in the AFC, but a loss to the Eagles (4-9) Thursday night wouldn’t ruin their chances.

“This decides if we go to the playoffs or not,” quarterback Andy Dalton said. “We still have to take it one at a time. We’ve got to get a win this Thursday, and then we’ll focus on the last two.”

Well, the next one is far more crucial.

The Bengals visit the Steelers on Dec. 23 and finish at home against the AFC North-leading Baltimore Ravens. Win or lose against the Eagles, the Bengals have to beat the Steelers to get in the playoffs unless Pittsburgh loses both of its other games — at Dallas this week and vs. Cleveland in Week 17.

“We want to finish these last three games 3-0 and see what happens after that,” cornerback Leon Hall said. “You get to losing games obviously this late in the season, you kind of take destiny out of your own hands. You don’t want to be part of that.”

Three wins — or only two if they’re against Pittsburgh and Baltimore — guarantees the Bengals their second straight playoff appearance for the first time since 1981-82. They lost to Houston 31-10 in a wild-card game last January.

Coming off a last-second loss at home to Dallas, the Bengals had no time to dwell on a disappointing defeat in a short week. Coaches went right to game-planning for the Eagles immediately after that game and players were back at practice on Monday.

“It’s a quick turnaround, and that’s probably a good thing for us,” coach Marvin Lewis said. “We need to improve fundamentally on the things we’re doing. Some of those little things, the details of our work, ended up putting us in the position to lose the football game.”

The last time the Bengals played the Eagles ended in a tie on Nov. 16, 2008. Afterward, Donovan McNabb said he thought games couldn’t end in ties and teams had to play to sudden death.

McNabb took plenty of grief for that mental blunder, but the six-time Pro Bowl quarterback ended up leading the Eagles to the NFC championship game that season. They won a pair of road playoff games before losing at Arizona.

The Eagles haven’t won a playoff game since and are headed for just their third losing season in Andy Reid’s 14 years as coach.

It doesn’t make them a pushover for the Bengals.

The Eagles dealt a serious blow to Tampa Bay’s playoff hopes with a 23-21 comeback win last Sunday. Rookie Nick Foles led them back from an 11-point fourth-quarter deficit and threw a 1-yard touchdown pass to Jeremy Maclin with no time left.

Foles will start his fifth straight game for Michael Vick, who along with running back LeSean McCoy remain sidelined by concussions. After a tough start, Foles has been impressive the last two games, giving fans a glimmer of hope for the future.

“We want to win every game,” Foles said. “The first game is this week and it was great to get the win last week. There’s a lot of things to improve on from last week so we need to go out there this week, play together as a team, keep improving, keep pushing each other, keep playing for each other, and just get the win.”

Foles had 381 yards passing against the Buccaneers, who have the worst-ranked pass defense in the NFL. He could have a tougher time against Cincinnati’s 11th-ranked unit. The Bengals also lead the league with 42 sacks, so Foles has to get rid of the ball quickly.

“I’m going to have to do a great job with blitz pickup and we need to execute our offense,” Foles said. “We need to run effectively and throw effectively. The big thing is run our offense well and execute well.”

Foles and rookie running back Bryce Brown could have big games if they catch the Bengals looking ahead to the Steelers. Brown had 347 yards rushing in his first two starts filling in for McCoy before he was held to just 6 yards on 12 carries against Tampa’s top-ranked run defense.

Brown has benefited from improved play by the offensive line, which has been overhauled because of injuries and inconsistency. The Bengals haven’t allowed a 100-yard rusher in the six games since Pittsburgh’s Jonathan Dwyer ran for 122 yards against them.

“They have a stout defense and they’re athletic,” Reid said. “They’ve got a good football team. Marvin has done a nice job with that group. They have some good young players and some good veteran players, a nice mix. They’ll be a good challenge for us.”

COLUMBUS (AP) — Deshaun Thomas did most of his damage in the first half. By then, he was just about... read more