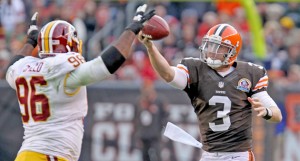 Cleveland Browns quarterback Brandon Weeden pulls back on a pass as Washington Redskins Barry Colfield pressures on the play in the third quarter at Cleveland Browns Stadium on Sunday in Cleveland. The Redskins defeated the Browns, 38-21. (MCT Direct Photo)

First place has him feeling better.

Cousins threw for 329 yards and two touchdowns filling in for an injured Griffin, leading Washington to its fifth straight win, 38-21 over the Cleveland Browns on Sunday.

Cousins connected with Leonard Hankerson for both TDs in his first career start and the Redskins (8-6) barely missed a beat without the talented and multi-dimensional Griffin, who sat out with a sprained right knee and wasn’t happy about having to stand on the sideline and watch his teammates play.

“I was not happy with the decision,” said Griffin, who was informed Saturday night of the plan to start Cousins. “That’s the decision they went with and I respect that. It doesn’t mean I have to necessarily like it. I feel like I could have played this week, next week, the week after. But that’s not my decision.”

Turns out, the Redskins (8-6) have more than one rookie QB who can win.

Last week, Cousins came off the bench after Griffin got hurt against Baltimore and rallied the Redskins to an overtime win.

Cousins was behind center from the start of this one and delivered a performance that extended Washington’s longest winning streak since 2007 and moved the Redskins into a three-way tie with the New York Giants and Dallas atop the NFC East.

Afterward, Griffin expressed disappointment at not suiting up, but Washington’s win took out some of the sting.

“We’re in first place in our division now, and it was a great business trip for us,” Griffin said. “I got healthier by not playing, we won the game and put ourselves in position to control our own destiny.”

Rookie Trent Richardson had a pair of TD runs for the Browns (5-9), who had their winning streak stopped at three and faint playoff hopes snuffed out. Coach Pat Shurmur’s fate may have rested on the Browns winning out, but that won’t happen and his days in Cleveland could be dwindling quickly.

“They would have been doing all the same things, with the addition of the option if RG 3 was in the game,” Shurmur said. “That looked like the Redskins offense. I’d like to credit Kirk. He did a nice job.”

Alfred Morris, a childhood rival of Richardson, had two touchdowns for the Redskins.

Wearing a burgundy warmup suit instead of his No. 10 jersey, Griffin, who sustained a mild sprain in the fourth quarter last week, cheered from the sideline as Cousins kept the Redskins moving toward the playoffs.

Griffin practiced all week and assumed he would start up until he was informed by coach Mike Shanahan during a meeting.

“He wanted to play, but when I hear two of the best doctors saying don’t play him, I don’t play him,” said Shanahan, who got his 173rd win, one behind Mike Holmgren for 11th on the career list.

Cousins is no RG3, but the fourth-round pick from Michigan State was efficient, accurate and only made one major mistake — an early interception to set up Cleveland’s first TD.

Cousins finished 26 of 37 as the Redskins improved to 5-0 since their bye. They’ll end the season with games against NFC East rivals Philadelphia and Dallas, teams they beat in consecutive weeks to start their streak.

If the Browns thought they were getting a break with Cousins, he proved to be as challenging to stop as his more elusive and hyped teammate.

Cousins admitted being nervous, but said going to bed knowing he would start helped.

“It was good to have a definitive answer, but I’ve been preparing to go all season as if I had to play knowing I’m one play away, “ said Cousins, who shook off the pick. “This isn’t my first rodeo. I did play a lot of football in the Big Ten. We started slow, but you’ve got to have character to dig deep. We didn’t get spooked by a slow start.”

Browns rookie quarterback Brandon Weeden struggled from the outset. He went 21 of 35 for 244 yards and two picks, both leading to Washington TDs.

Cousins’ second TD pass to Hankerson gave the Redskins a 24-14 lead. As Cousins came to the sideline, Griffin gave him a fist bump and then sat on the bench with his backup, who for the past two weeks has shown he too can lead the Redskins.

Before the game, Griffin gave Cousins some advice.

“I talked to him about being cool, calm and collected and not to freak out,” Griffin said. “He did a good job of staying poised and staying confident in there.”

Weeden came back with a 69-yard scoring strike to speedy rookie Travis Benjamin to pull the Browns within 10, but Cousins calmly took the Redskins down the field with Morris scoring to make it 38-21.

With Griffin out and inactive, Shanahan had to tweak his game plan and Cousins ran it with precision.

“He was nervous and wanted to get out there so bad,” nine-year cornerback D’Angelo Hall said. “I told him to just go out and play, we have your back. We saw him win last week. We knew if he played a whole game he would do good things.

“It’s good to see the car keys turned over to somebody else and we win.”

NOTES: Redskins K Kai Forbath made a 44-yard field goal and is 15 of 15, one shy of the NFL record to start a career. … Morris has nine rushing TDs, passing Skip Hicks (1998) for the most by a Redskins rookie. … Shanahan said OT Tyler Polumbus has a concussion. … Shanahan did not have any updates on injuries to LB Lorenzo Alexander (shoulder) or OL Will Montgomery (knee).

Flyers get win in OT

Jim Walker jim.walker@irontontribune.com   PEDRO — In order to win this game, the St. Joseph Flyers were going to need... read more