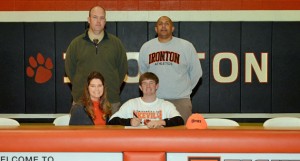 For Sean lawless, an email turned into a letter.

A letter-of-intent, that is.

An email invitation to the University of Pikeville baseball clinic resulted in the Ironton Fighting Tigers’ senior infielder signing a letter-of-intent to play for the Bears.

“I got an email and was invited to a clinic and I went and showed my stuff,” said Lawless. “They said they would call if they like it.”

They must have liked what they saw because they called. Pikeville head coach Chad Gassman expressed his thoughts about Lawless very enthusiastically.

“The biggest thing is that he is a young man that has high character and he is a hard worker,” said Gassman. “We are excited about the progress he will make in our program if he continues to work hard.”

Hard work hasn’t been a problem for Lawless. He plays both summer and fall baseball along with the high school season.

“I try to do a lot of lifting and me and my friends go to the field and throws and hit,” said Lawless.

He also gets some help from another person.

“He’s the only player I’ve coached who I’ve seen out passing with his mom,” said Ironton coach Toben Schreck.

“Sean is a hard worker and he has a nice swing. He’s very coachable and he loves to play the game.”

As a pitcher, Lawless was 3-3 with a 3.41 earned run average, two complete games and just nine walks in 37 innings pitched.

“He threw against some pretty good teams, too,” said Schreck noting his losses were to Ashland, Ky., Russell, Ky., and Piketon.

Going to the next level won’t guarantee Lawless of immediate playing time. He said he would like to play early, but he admits he has the patience to wait his turn.

“The coach told me they were a veteran team. I told him that doesn’t mean being on the jayvees I won’t work any harder,” said Lawless.

Regardless, Lawless is just happy to have the opportunity to continue his playing career.

“It’s been my dream as a little kid to pursue playing baseball into college,” said Lawless.

“My goal was to get to college and I’m just going to bring my best game and let the results come.”

Lawless plans to major in pre-pharmacy.

Jim Walker jim.walker@irontontribune.com   Welcome to the improved version of The Ironton Classic. Unlike a two-day affair in the past,... read more