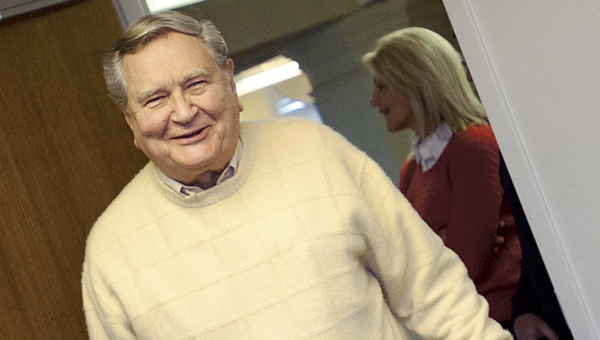 Bill Dickens cracks a smile as he is congratulated for his year’s of service as the city’s economic development director with the Ironton Port Authority Thursday at his retirement party.

The rocking chair on Bill Dickens’ retirement cake may have indicated he was moving toward the easy life — but those who gathered to honor Ironton’s economic development director laughed at the thought.

He received awards and recognition from Paul Woods, Ironton Port Authority chairman, and Mayor Rich Blankenship – the latter saying he was thankful to still have Dickens’ phone number.

“I’m sure there will be times I will call him for advice,” Blankenship said. “His advice and business knowledge have been a big benefit to me as a young mayor. Over the past five years Bill has been a rock and good friend. He has been an overall positive influence on the city as a whole, represented Ironton well and we are going to miss him.”

A testament to the love for his community, As Dickens performed his job for a token salary — one that anyone else would never have taken for such a time consuming and difficult job, Blankenship said.

But Dickens said he was fortunate to be in a position where money was not an issue.

“I am financially secure,” Dickens said. “But the health insurance was certainly important — as it is to anyone my age. But it was more even than that. Both of my parents worked into their 80s and I hope to do the same. I need a reason to get out of bed in the morning and something to occupy my time and something I feel good about.”

Helping bring jobs to Ironton, through use of his business knowledge and networking skills, is something to feel good about, Dickens said.

And Woods agreed, saying his fellow Ironton High School class of ’56 graduate’s experience and knowledge of how to get things done within the Ironton and Tri-State community are nearly unparalleled.

“Bill Dickens has been a very successful businessman in the Ironton community for about 50 years,” Woods said. “He’s a fine gentleman who loves his hometown and does everything he can to help out.”

In Dickens’ case “everything” includes coming out of his first retirement to continue his service to community.

“I enjoyed retirement for awhile, but I found myself getting bored,” Dickens said. “I came over here because as an industrial contractor I have worked with municipal government and industry. I feel we all should work to make Ironton better and I think we are on the right track of making it happen.”

Dickens said he is especially proud of his work with the Clean Ohio Fund grants used to clean up old industrial sites and bring new jobs and keep young professions in Ironton.

And Dickens said he wants to continue being a part of the effort to restore Ironton to the glory days of he remembered when he was a young man starting his career.

“As a board member of the Port Authority, I hope to continue to contribute to Ironton,” Dickens said. “I have reached a stage in my life where I am really keen to be giving back. Life has been good to me and I enjoy giving back. My generation has been really fortunate. I grew up in Ironton when it was a really booming area and I was very successful in building a business in part of that.”

Blankenship said he is still unsure how to fill Dickens position. He said he plans to analyze the position and present the city council with a proposal next year.