Bengals have options in final game 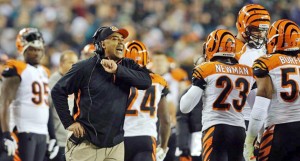 Cincinnati Bengals’ head coach Marvin Lewis encourages his players during a win at Philadelphia. The Bengals have already clinched a playoff spot regardless of the outcome of their final game. (Photo Courtesy of Cincinnati Bengals.com)

CINCINNATI (AP) — With their playoff seeding locked in place, the Bengals have the option of taking it easy with some of their players in the final regular-season game.

They’ve done it before, and it hasn’t turned out so well.

The Bengals (9-6) haven’t won a playoff game since 1990, going 0-3 in the postseason under coach Marvin Lewis. He wouldn’t talk in any detail Monday about his plans for their concluding game against Baltimore at Paul Brown Stadium, other than to say he’s learned from those playoff losses.

In 2009, Cincinnati had clinched the AFC North title before the final game on the road against the Jets. He rested starters during a 37-0 loss to New York. One week later, the Jets came to Cincinnati and won 24-14.

The starters were rested, but their momentum was gone.

“How’d that work out for us?” Lewis said on Monday. “I don’t really have any beat-up guys. So, the only thing that is at stake is you go out and play to win the game every time we go. That’s important.”

A 13-10 victory in Pittsburgh on Sunday clinched the final AFC wild-card spot. Baltimore (10-5) won the AFC North later in the day by beating the Giants.

The Bengals are locked in as the sixth seed, so they’ll be on the road for every game in the playoffs. Their destination will be decided by how the final weekend plays out.

The Patriots currently are the No. 3 seed, which would put the Bengals in line for a first-round game at New England. If the Ravens beat the Bengals on Sunday and New England loses at home to Miami, Baltimore would move into the third seed and host Cincinnati in the first round.

There’s also a chance the Bengals could open at Houston — where they lost 31-10 in a first-round game last season — or at Denver. The Broncos beat the Bengals 31-23 at Paul Brown Stadium on Nov. 4.

There are so many possibilities that the Bengals aren’t paying much attention. Lewis is trying to get them focused on something else this week: evening up things with the rival that made them look bad at the start of the season.

The Bengals opened in Baltimore on Monday night and lost 44-13, one of the worst season-opening drubbings in franchise history.

“We didn’t kick the season off very good, and now we get to finish it at home,” Lewis said. “We don’t know who we will play (in the playoffs) or where. We just have to take it on ourselves. More in focus, though, is the Baltimore Ravens. They are a good team that just won our division and a team that beat the snot out of us in the first game.”

The Bengals finish at home against the Ravens for the second straight season. Last year, Baltimore came to town and clinched its first division title since 2006 with a 24-16 victory. The Bengals got a wild card when the Jets and Broncos also lost their final games.

It’s only the second time in franchise history the Bengals are going to the playoffs in back-to-back seasons. They also did it in 1981 — when they reached their first Super Bowl — and in the strike-shortened 1982 season.

The win at Pittsburgh on Sunday had special significance. Cincinnati hadn’t beaten the Ravens or Steelers in the last two seasons, going 0-6 against its biggest rivals.

“That’s a huge win for us because people were doubting us,” defensive tackle Domata Peko said on Monday.

Even though the Bengals can’t improve their playoff position, they can add to their momentum. Last season, dropped three of their last five games, then lost to Houston in the first round.

The win in Pittsburgh was Cincinnati’s sixth in the last seven games. Although the offense has struggled lately, the defense has held opponents to 13 or fewer points six times during that seven-game stretch.

“In December last year, we were kind of (leveled) off a little bit,” Peko said. “This year we started slower, but now we’re starting to take off. Those are the teams that are dangerous.”

Notes: Lewis said the Bengals emerged from the game in Pittsburgh with no significant injuries. … The Ravens game hasn’t sold out. The Bengals have failed to sell out two of their last three games, which were blacked out on local television. Last season, they did a buy-one, get-one-free ticket promotion to get the final game against the Ravens sold out.