Rising above for a Cause 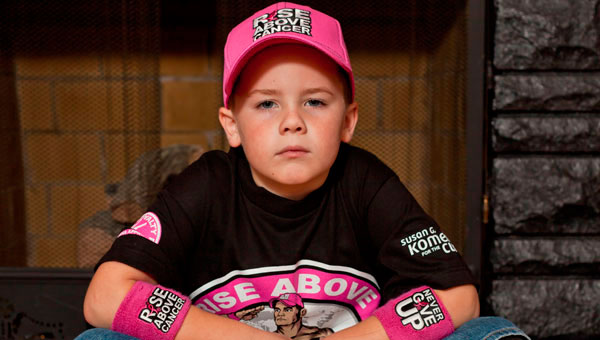 Seven-year-old Brady Bane dedicated his birthday and raised money for the Susan G. Komen Foundation for the Cure. He was inspired by the WWE's focus on a pink theme during October, which is Breast Cancer Awareness Month, and seeing his idol John Cena wearing his pink Rise Above Cancer shirt.

PROCTORVILLE — When their 7-year-old son said he did not want to receive presents for his birthday, and instead asked for people to donate money to the Susan G. Komen Foundation for the Cure, Lorie and Chris Bane did not believe him at first.

But they said they quickly learned how serious Brady was.

“I did this because the WWE (professional wrestling organization) did it and I wanted to, not really copy them, but still do it myself,” Brady said. “When I was in the car and told my mom and dad I wanted to raise money they asked a hundred times if I was sure — and I said ‘yeah.’”

Brady said he was curious when he saw the WWE take on a pink theme during October, which is Breast Cancer Awareness Month, but it was seeing his idol John Cena wearing his pink Rise Above Cancer shirt that made him start wanting to do his part as well.

“I think he’s the best wrestler,” Brady said. “I like him because he was the one that started raising money and I thought that was very nice. I want to be like that — be a nice person and help others.”

And in his effort to be a nice person who helps others Brady helped raise $775. This was done through a variety of fundraisers from personal donations to a Zumba night at the family’s church.

Lorie said there was no lack of supporters or people affected by Brady’s mission to make a difference.

“Everyone was there to support him,” Lorie said. “His grandparents, the church families, his school friends. Everyone.”

Even the owner of his favorite spaghetti place donated to his cause. Brady said he was eating at Jim’s Spaghetti in Huntington, W.Va., when the owners gave him an envelope and told him not to open it until his birthday. Brady found a $50 bill inside.

Brady did not stop with the fundraiser, committing himself fully to his cause, he also asked the theme for his birthday party be pink, like the WWE wrestling ring he saw all October.

“We had to double check that one to be sure as well, but that’s what he wanted” Chris said. “He never backed down for a second. When people would hear about what he was doing they would respond with ‘that’s great, I can’t believe someone his age is doing that.’ But the people who knew him would just say, ‘that sounds like Brady.’

“He’s just got such a big heart,” Lorie said. “I always say he’s a little boy with an old soul. When we’re in groups he always tends to go toward the older people. He just likes to help people and make people feel good.”

Brady also went out on Halloween dressed as his favorite wrestler and fellow breast cancer awareness supporter. But, as focused as he was in everything else, Brady did not wear Cena’s normal green attire, instead again donning some pink.

“I’m really shocked and proud for how much money he raised,” Sydney said. “At first I was like ‘a pink birthday party for a boy and pink Halloween costume?’ and he was like ‘yeah’ so I saw how serious he was.”

Lorie and Chris said they could not be more proud of their son and hope he continues to have his spirit of giving as he gets older.

Singing in the season

Members of the Rock Hill Middle School Show Choir perform during a Christmas concert at Ohio University Southern at the... read more