Ashton glad she can run another 4 years 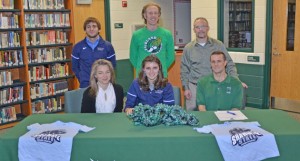 PROCTORVILLE — Megan Ashton has been running for six years. She can think of nothing better than to run another four.

Ashton completed her high school cross country career this past fall, but she earned an extension on her running career by signing a letter-of-intent with the Shawnee State Bears.

After her sixth grade year, Ashton said her father, Jess, talked to her about running. After giving it some thought, she decided to try.

“I started running in the summer after my sixth grade year. My dad ran when he was young and he encouraged me to try it and I loved it,” said Ashton.

Not only did she take up running cross country and distance races in track, but her younger sister Shanan also runs.

“I don’t know that I was the reason she ran. We are competitors during our races, but obviously we’re friends off the course,” said Ashton with a laugh.

Ashton said her familiarity with Shawnee State had the most influence in her choice.

“I know a lot of their runners and they enjoy their program and I’m hoping it works out,” said Ashton.

Running at the college level will be harder than high school, but hard work is nothing new to Ashton who runs an average of six miles a day during the season. She said she runs every other day during the off-season.

“The easiest day is three miles and the hardest day is nine which is on Sundays,” said Ashton.

“Megan made a decision she wanted her senior year to be special and she wanted to break the 20-minute barrier,” said Wentz. “She accomplished that and made everyone around her better at the same time.”

“The biggest accomplishment was going to the state this year. That was our goal every year and to do it my senior year was pretty awesome,” said Ashton.

She plans to major in nursing and understands the demands of both her academic and athletic fields.

“The coach said they have other girls in nursing and it’s worked out pretty well. You might have to run on your own, but that’s okay,” said Ashton.

The Ironton-Russell Bridge was closed to all traffic at approximately 10:30 p.m. Saturday night — and could stay that way... read more