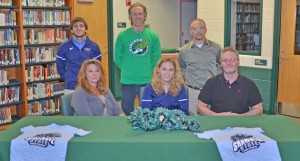 PROCTORVILLE — Sydney Pettit is full of surprises, mainly with herself.

Pettit said she never expected to run at the college level four years ago. In fact, she kept surprising herself each step along the way.

My eighth grade year I decided I needed to make some changes if I wanted to be good at something, so I started running by myself after school,” said Pettit.

“I couldn’t believe I accomplished that,” said Pettit.

Her success led Fairland coach Chuck Wentz to encourage Pettit to run cross country the next year and she surprised herself again.

“I ran a 20:22 my sophomore year in cross country. I accomplished two things that I never thought I could,” said Pettit.

Although Pettit may have surprised herself, Wentz wasn’t caught off guard.

“Sydney was one that when I asked, ‘Did you run on Sunday?’ I always knew the answer, ‘Yes.’ She and Megan (Ashton) were very dedicated to the team and both were leaders,” said Wentz.

Pettit was instrumental in the Lady Dragons’ success, During her career, the team won three district titles, one regional crown and earned a state meet berth last fall.

“In the beginning I kind of pushed myself. I always admired people who could run like that. It was hard at first, but it got to where it became more natural. It’s calming and it brought me out of my element,” said Pettit.

“Shawnee had what I wanted. I always make sure academics are first,” said Pettit, who plans to major in accounting.

“Coach Wentz talks about Shawnee and how they have a great running program. They are close so I can come home whenever I want.”

Wentz — whose son Chuckie is an assistant coach at Shawnee State — expects Pettit to surprise herself even more at the college level.

“Sydney will be missed by the Fairland cross country team,” said Wentz. “Shawnee State is getting two very talented runners and very good students as well.”

Ashton glad she can run another 4 years