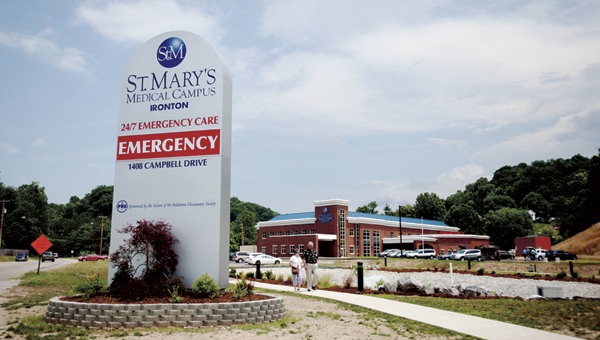 With a New Year taking off on Tuesday and an upcoming year that will send those suffering from triskaidekaphobia — that’s the fear of the number 13 — into a cave for the next 12 months, a look back at what made 2012 unique is in order.

For many in Lawrence County the big news was that a hospital had come back to Ironton when, in July, St. Mary’s Medical Center in Huntington, W.Va., opened its Ironton Campus off State Route 141. Ironton had been without a hospital since early the 2000s when the Lawrence County General Hospital (River Valley Health Systems) closed.

St. Mary’s bringing in a new facility had been a dream for about 12 years before bricks and mortar rose up from the site into a state-of-the-art facility. Now there is a 24-7 emergency room available for the county.

The $18.5 million facility features 46,000 square feet on two floors with 12 treatment rooms and two triage areas that are manned at all time to provide quick assessment and the beginning of treatment.

Since this could mean the start of a full-fledged hospital back in the county, plus the jobs St. Mary’s has already brought here, the new medical center is the No. 1 story of 2012.

Coming in at No. 2 is another much awaited construction project — the start of the new Ironton-Russell Bridge.

In May, Ohio Gov. John Kasich and Kentucky Gov. Steve Beshear led a delegation of county and state officials from both sides of the river for the groundbreaking at Depot Square in downtown Ironton.

The project, which had been delayed several times over the past decade, will replace the existing span, which was constructed in 1922. ODOT officially awarded a $81.2 million dollar contract to Brayman Construction, of Saxonburg, Pa., in January.

The new Ironton-Russell Bridge will be located between Second and Jefferson streets in downtown Ironton and near the U.S. 23 viaduct south of Russell, Ky.

The project also includes demolition of the existing bridge upon completion of the new structure.

Both city and county leaders have struggled with providing services while staying within the limitation of incoming revenue.

Last year the city’s general fund started with a deficit of $165,000, while 2013 will begin with a carryover of $56,634. Finance director Kristen Martin looks at that as a sign the city is on its way toward rebuilding towards a healthier fiscal situation.

Aiding that goal was cutting the city’s workforce by 12 employees that included disbanding the city’s police dispatching system turning it over to the Lawrence County Sheriff’s Office.

The Lawrence County Commissioners approved a 2013 budget days before Christmas that they say offers no wiggle room to officeholders who are used to coming back throughout the year for new appropriations.

One of the belt-tightening moves of the city was shifting police dispatching to the sheriff’s office.

Previously it had been an independent agency. The decision was made on the grounds of effficiency, according to Commissioner Bill Pratt.

Another event that supporters said was a long time coming was the construction of a $400,000 barn at the Lawrence County Fairgrounds to be used by the Junior 4-Hers at the summertime fair.

However, getting that structure from architect’s plans to steel and concrete took firing one contractor and hiring another, two lawsuits still unresolved and some in the county wondering if the fair would actually happen in 2012.

At the heart of the situation was the termination of the Canton-based contractor originally hired to put up the barn. Structure Steel was hired in February and fired in May by the fair board citing delays, little work completed and the refusal by the contractor to return approximately $200,000 the board said it should not have received because there was no work done for that compensation.

Structure Steel countered with its own lawsuit citing failure of the fair board to get the necessary permits halting construction. A second contractor, STI Construction of Powell, pulled off the eleventh-hour project with the barn ready for the first day of the fair.

The eastern end of the county lost an informal headquarters for community activities this summer when the Ironton-Lawrence County Community Action Organization closed the Sybene Senior Center.

The action happened in July when the CAO transferred the Sybene center’s director to the Ironton Senior Center in the Park Avenue Apartments.

The center was one of the locations for daily congregate meals for seniors. Those meals were prepared at the Sybene center. Reduction in federal funding for senior programs was cited as the main reason for the closure of the center and consolidation of programs.

Right now the CAO is allowing the county’s board of developmental disabilities to use the facility as training center for some of its clients starting at the first of the year.

7. The Fate of Memorial Hall

The abandoned 19th Century structure, built to honor Union veterams from the Civil War, almost had a chance for a resurrection in 2012 until two county commissioners nixed spending the money.

History buffs and architectural preservationists pushed for the county to come up with a plan to restore the structure. Their goal was to turn it into the headquarters for the county’s emergency agencies. But the cheapest price tag for that came in at approximately $3 million.

Even with the possibility of getting tax credits, which would need the involvement of a third party, the project died. Now Memorial Hall’s fate is back in the hands of Ironton City Council, who council members have not publicly said if they want to tear it down or attempt a restoration.

In September the county, as well as animal rights groups throughout the state, were shocked when two family dogs were repeatedly stabbed to death while they were lodged on their owners’ property in Pedro. One dog tried to find refuge in its dog house, but one of the attackers ripped off the roof of that shelter to kill the animal.

Brian L. Sharp, 20, and Jonathan D. Jiles, 20, both of Pedro, pled guilty and were sentenced to the maximum for a first-degree misdemeanor prohibition concerning companion animals. They received six months in the county jail.

They were also sentenced to 30 days for criminal trespassing, fined $1,250 and banned from ever owning a companion animal.

The attack brought renewed interest in the state to change laws regarding animal abuse and animal killing from misdemeanors to felonies.

In November, 69-year-old Don Copley of Proctorville pleaded guilty to 15 counts of first degree rape. He had originally been indicted with 51 counts of rape concerning incidents involving three of his nieces who were living in his home.

Those counts were reduced to 15 counts. Charges involving a fourth victim, said to be under 13 years old, were also dismissed. Following the plea deal Copley was sentenced to 60 years in the prison.

His wife, Beverly, is still facing charges that the prosecutor’s office said would likely be amended to child endangerment.

The CAO took over operation of the solid waste district in the 1990s, but staff at the district seeking county and state benefits wanted to become an independent agency.

However, the split was not uneventful as the CAO stated the vehicles used by the district were assets of the CAO. The district responded by instructing its attorney to take all legal means to get the cars back saying it couldn’t do its work without the vehicles.