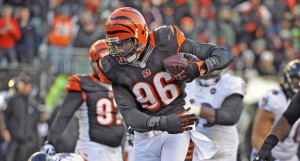 Cincinnati Bengals’ Carlos Dunlap (96) runs for a touchdown on an interception as he avoids Baltimore Ravens quarterback Tyrod Taylor, bottom, in the fourth quarter at Paul Brown Stadium on Sunday. The Bengals defeated the Ravens, 23-17. (MCT Direct Photos)

CINCINNATI (AP) — Andy Dalton, A.J. Green and the rest of the Bengals playmakers watched from the sideline as their backups pulled another victory out — with the defense leading the way, of course.

It’s been their way during one breakthrough win after another.

Carlos Dunlap returned an interception 14 yards for a touchdown in the fourth quarter Sunday, sending Cincinnati to a 23-17 victory over the Baltimore Ravens in a regular-season finale that had more of a preseason feel.

“It’s a situation where both teams have gotten in the playoffs and you really want to look forward to next week having people fresh and ready and not have any injuries.”

The Ravens (10-6) had already clinched their second straight AFC North title and decided to use the final game to get healthier. They had several stars inactive and pulled quarterback Joe Flacco and running back Ray Rice after only two series.

They’ll host Andrew Luck and the Indianapolis Colts at 1 p.m. EST next Sunday, reuniting them with former defensive coordinator Chuck Pagano. The Colts head coach has returned from three rounds of chemotherapy.

“Chuck’s like a dad to me,” Ravens safety Ed Reed said. “He means a lot to me. I would have much rather seen them in the AFC championship game than the first game.”

The Bengals (10-6) are locked into the sixth seed as the final wild-card team. They’ll open next Saturday at 4:30 p.m. in Houston, where they lost 31-10 in the first round of the playoffs last season.

“I think it will be good,” said Dalton, who grew up in suburban Houston. “We played there last year and know the atmosphere and what it’s going to be like. The experience last year will definitely help us.”

With hardly anything at stake, the Bengals went into preseason mode on a 26-degree afternoon with a wind chill of 16. They got their seventh win in the last eight games.

“I’m glad that’s over,” coach Marvin Lewis said. “That’s a difficult situation to be in. I thought our guys handled it about as well as you can handle it.”

Josh Brown kicked three field goals in the second half. Dunlap tipped one of Tyrod Taylor’s passes to himself and returned it for a clinching touchdown with 6:06 left, jumping into the stands and sitting there for several seconds while fans smacked his back.

“I wanted it to be a highlight to remember,” Dunlap said.

The Bengals headed into the playoffs for the second straight season after beating rivals Pittsburgh and Baltimore in back-to-back weeks — a breakthrough for a franchise that had been 0-6 against those top rivals the past two seasons.

The defense has led the way, scoring more touchdowns than the offense over the past two weeks. Cornerback Leon Hall returned an interception for the only touchdown against Pittsburgh, and Dunlap clinched the win on Sunday with his return.

“I think we’ve found ways to win games, and that’s the thing we needed to learn as a young team,” Whitworth said. “This young team has learned how to win games.”

The Bengals wanted to get their running game tuned up for the playoffs, but BenJarvus Green-Ellis had a hamstring tighten up during pre-game warm-ups and was held out of the game. Lewis didn’t know how it would affect him in the playoffs.

The Ravens sat some of their banged-up playmakers and started pulling others from the game after only two series. Receiver Anquan Boldin, defensive tackle Haloti Ngata and linebacker Terrell Suggs were inactive, giving them a week to rest.

The Bengals went with a conservative approach. Dalton didn’t even throw toward Green until the final drive of the first half, keeping the Pro Bowl receiver out of harm’s way. Bruce Gradkowski took over in the second half for Dalton, who was 10 of 15 for 78 yards with a pair of sacks.

Brown kicked field goals of 47, 32 and 38 yards in the second half. Brown will be the Bengals’ kicker in the playoffs with Mike Nugent sidelined by a calf injury. Brown is 11 for 12 on field goal tries since he signed as a free agent, the only miss on a 56-yard attempt in Pittsburgh.

Taylor, who had thrown only four passes all season, replaced Flacco and led a pair of touchdown drives by running away from defenders. Anthony Allen ran 2 yards for a touchdown, and Taylor scored on a 1-yard run.

Notes: The crowd of 61,565 gave Cincinnati six sellouts in eight home games. The Bengals sold out only two games last season on their way to the playoffs. … Baltimore’s Justin Tucker missed a 45-yard field goal try and made one from 49 yards, leaving him 30 of 33 for the season. His 90.9 percent success rate set an NFL record for a rookie. … The Bengals had four sacks, giving them a franchise-record 51 for the season. … S Chris Crocker hurt his right thigh while trying to make a tackle in the first quarter and didn’t return. He said the injury wasn’t serious.

Jim Walker jim.walker@irontontribune.com   As the world heads for a new year, Bill Washburn decided to take a look back.... read more