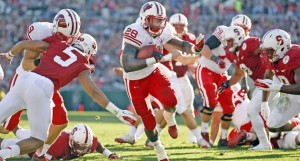 Wisconsin’s Montee Ball (28) scores a touchdown on this run during the Rose Bowl on Tuesday, January 1, 2013, in Pasadena, California. The Stanford Cardinal defeated the Badgers, 20-14. (MCT Direct Photo)

Usua Amanam made the decisive interception near midfield with 2:30 to play as the Pac-12 champion Cardinal (12-2) ended their four-decade drought in the Rose Bowl.

The Big Ten champion Badgers (8-6) lost the Rose Bowl in heartbreaking fashion for the third consecutive season. Montee Ball rushed for 100 yards and his FBS-record 83rd touchdown, but Wisconsin managed only 82 yards after halftime.

With impressive defense of its own, Wisconsin still stayed in position for an upset in the one-game return of Hall of Fame coach Barry Alvarez, who was back on the Badgers’ sideline in his red sweater-vest seven years after hanging up his whistle.

Curt Phillips went 10 for 16 for 83 yards passing and that crucial interception for Wisconsin, doing more with 64 yards on the ground.

ORLANDO, Fla. (AP) — Aaron Murray threw five touchdown passes to set a Georgia bowl record, including two in the fourth quarter, and the Bulldogs beat Nebraska in the Capital One Bowl.

Murray shook off a pair of first-half interceptions, including one returned for a touchdown, and passed for 427 yards — also a Bulldogs bowl record — against the nation’s top-ranked passing defense. He was named the game’s most valuable player.

Georgia (12-2) reached 12 wins for the third time in school history.

The Cornhuskers led 24-23 at the half, but committed two of their three turnovers in the final 30 minutes. Taylor Martinez had two interceptions and two touchdown passes for Nebraska and Rex Burkhead rushed for 140 yards in his final college game.

Nebraska’s offense finished with 443 total yards, but the Bulldogs defense was stingy when it needed to be. They sacked Martinez five times, with All-American linebacker Jarvis Jones notching two. Damian Swann had both Georgia interceptions.

Nebraska’s offense finished with 443 yards, but the Bulldogs were stingy when they needed to be.

TAMPA, Fla. (AP) — Connor Shaw led South Carolina to the brink of victory and Dylan Thompson carried the Gamecocks over the hump in the Outback Bowl.

Thompson came off the bench to throw a 32-yard touchdown pass with 11 seconds left Tuesday, enabling South Carolina to tie a school record for victories with a 33-28 win over No. 19 Michigan.

Thompson replaced Shaw during the winning drive, covering the final 43 yards after Shaw began the march from his own 30. Devin Gardner’s third TD pass of the game had given Michigan a 28-27 lead.

Shaw threw for 227 yards and two touchdowns after missing South Carolina’s regular season finale with a left foot sprain. Thompson led the Gamecocks (11-2) to a victory over their archrival, and threw for 117 yards and two TDs.

Gardner threw for 214 yards in his fifth start for Michigan (8-5) since Denard Robinson injured his right elbow late in the season. Robinson took some snaps at quarterback and attempted his first passes since Oct. 27, but lined up mostly at running back and rushed for 100 yards on 23 carries.

Ace Sanders caught TD passes of 4 yards from Thompson and 31 yards from Shaw, who completed 18 of 26 passes before limping off on the final drive. The speedy receiver had nine catches for 92 yards and also scored on a 63-yard punt return — one of four plays over 50 yards that Michigan yielded.

The Wildcats (10-3) earned their first bowl win since 1949, ending a nine-game losing skid that was tied for the longest in NCAA history. They also celebrated double-digit victories for the first time since the 1995 Rose Bowl season.

Quentin Williams returned an interception 29 yards for a touchdown on the third play of the game and Nick Vanhoose set up a late touchdown with a 39-yard interception return. Those plays were the difference in a back-and-forth game that featured more interceptions (seven) than touchdowns (six).

Northwestern’s two-quarterback system kept the Bulldogs (8-5) off balance most of the day.

Scrambler Kain Colter ran for 71 yards, making up for his two interceptions. Backup Trevor Siemian threw for 120 yards and an interception, and also ran for a score.

Even with the turnovers, they were more efficient than Mississippi State’s Tyler Russell.

Russell completed 12 of 28 passes for 106 yards, with two touchdowns and four interceptions. He had thrown only six picks in the first 11 games this season. LaDarius Perkins ran 19 times for 84 yards for the Bulldogs, and freshman Josh Robinson added 91 yards on seven carries.

DALLAS (AP) — Clint Chelf threw three of Oklahoma State’s five touchdown passes and the Cowboys shook off a disappointing Big 12 finish by dominating Purdue 58-14 in the Heart of Dallas Bowl.

The Cowboys, a year removed from a Fiesta Bowl win that capped the best season in school history, forced five turnovers and had another short TD drive after a 64-yard punt return from Josh Stewart.

It was the biggest bowl win for Oklahoma State since coach Mike Gundy was the quarterback in a 62-14 rout of Wyoming in the 1988 Holiday Bowl. The Cowboys (8-5) missed out on upper-tier bowls after narrow losses in their last two Big 12 games.

Leading 28-0 at halftime, Oklahoma State erased any lingering doubt three plays into the second half when Justin Gilbert stripped Purdue receiver O.J. Ross on a short completion. The loose ball shot straight to Daytawion Lowe, who ran 37 yards down the sideline in front of the Purdue bench for a 35-0 lead.

Oklahoma State’s 58 points were the most in a bowl game at historic Cotton Bowl Stadium, topping the 55 scored by Keyshawn Johnson and Southern California against Texas Tech in 1995.

Manuel went 26 for 38, threw for one score and ran for another.

The Huskies were widely derided as unworthy of a BCS bowl berth, and didn’t do enough to silence the doubters. They were outgained 534 yards to 259.

The trick plays in the kicking game helped keep the Huskies close until the fourth quarter, but when it came to Lynch, not much fooled a Seminoles defense ranked second in the nation. And the Huskies’ last attempt at razzle-dazzle backfired when receiver Da’Ron Brown lost a fumble on an end around at midfield, setting up Florida State’s final touchdown.

Jim Walker jim.walker@irontontribune.com   The Ironton Fighting Tigers have added a game to their schedule, but it won’t be an... read more