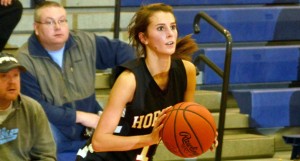 Adkins reached the 1,000-point career scoring mark and Jones scored all 17 of her points in the fourth quarter and overtime as the Coal Grove Lady Hornets slipped past the South Point Lady Pointers 48-45 Thursday in an Ohio Valley Conference game.

“This is one of those game where it was back and forth on the scoreboard,” said Coal Grove coach Rick Roach.

“Coming into the game the team was really excited because we knew Adkins was only 10 points from scoring her 1,000th point. At halftime I told Adkins that she would get her points. We just need to play team basketball.”

Adkins had 12 points to go with Jones’ total and Darrien Hankins grabbed 8 rebounds as Coal Grove improved to 8-2 and 2-1 in the OVC.

Coal Grove led 12-6 after the first quarter, but South Point rallied to take a 20-18 halftime lead.

Adkins hit a 3-pointer as she reached her milestone to begin the second half. Coal Grove went on a 5-0 run to take the lead, but South Point came back to go up 28-26.

Jones scored 10 points in the fourth quarter as Coal Grove took the lead, but the Lady Pointers hit a shot before the buzzer to force overtime.

“It’s a lot to ask of a five-foot-, five-inch guard to drive at a six-foot-one, but she did,” said Roach.