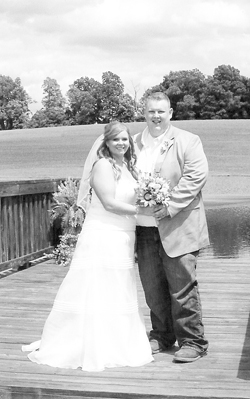 Ashley Renee Friend and Nathan Scott Colegrove were married on the afternoon of June 2, 2012. The ceremony took place at Bill and Brenda Cade’s farm in Waterloo.

The ceremony was performed by the Rev. Roger Friend, uncle of the bride. The bride was given in marriage by her father.

The bride is the daughter of Charles Allen and Tammy Friend of Coal Grove. She is the granddaughter of Kenneth and Helen Morrison and Mildred Friend, all of Ironton, and the late Charles Friend. The groom is the son of Steve and Jami Colegrove of Wilgus. He is the grandson of Dennis and Charlotte Miller of Wilgus, and Betty Colegrove of Deering and the late Daren “Scottie” Colegrove.

The maid of honor was Megan Friend, sister of the bride. Bridesmaids were Rose Francis and Elizabeth White, aunts of the bride, and Briana McWhorter, friend of the bride.

The best man was James Wilson, friend of the groom. Groomsmen were Seth Colegrove, brother of the groom, Travis Neal and Derek Carpenter, friends of the groom.

The reception was held at the farm with Brent Dickess, Tommy Cade and C and C Grocery catering the food. Pie was served instead of cake, provided by friends and family members. Photography was done by Brenda and Everett Jenkins.

After a honeymoon to Gatlinburg, Tenn., the couple resides in South Point.

Kimberly Eileen Raymer and Stephen “Seth” Colegrove were united in marriage on the evening of Sept. 8, 2012, on the... read more