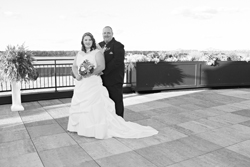 Kimberly Eileen Raymer and Stephen “Seth” Colegrove were united in marriage on the evening of Sept. 8, 2012, on the rooftop of the Frazier History Museum, in Louisville, Ky.

The ceremony was performed by the bride’s uncle, the Rev. Buddy Phelps. The bride was given in marriage by her father.

The bride wore an A-line gown with a sweetheart bodice covered in beaded lace. It had side draped satin with pick up detail and caped sleeves. Her jewelry included a string of pearls given to her by her grandmother. The wedding colors were purple and silver. The bride carried a bouquet of purple hydrangeas and white calla lilies. The wedding and reception included a comic book theme throughout.

The maid of honor was Megan Givan, friend of the bride. Bridesmaids were Nikki Raymer, sister of the bride, Cheryl Runyon and Dana Mahan friends of the bride.

A reception immediately followed the wedding at Swiss Hall. Photography was done by friends Talitaha Patterson and Holly Lambert.

After a honeymoon in Chicago, the couple resides in Louisville.

Nathan and Holly Lambert, of Kitts Hill, announce the birth of their daughter, Heidi Wren. She was born Oct.... read more