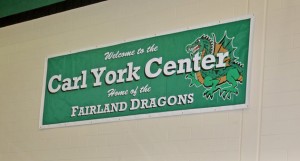 Fairland honored its legendary boys’ basketball coach by dedicating the gym as the Carl York Center on Friday when the Dragons beat the Chesapeake Panthers 63-60 Friday.

Gary Salyer not only played for York at Fairland but also became an assistant coach under him and later coached against him.

“I was around him for 20 some years. I saw many sides of coach York,” said Salyer. “To me, he was much, much more than a great coach. I firmly believe he was the reason I became a coach. Seven of his players became coaches. He was the role model for us.”

A former football and basketball standout at Marshall University, York coached at Fairland beginning in 1954 and ending in 1978. His tenure was interrupted for a year and a half while he served in the Army. He returned in 1956 due to an exemption because he was a teacher.

York later coached at South Point and his 1980-81 team went 18-0 during the regular season.

“Believe me, he really hated to lose,” said Salyer. “You gave your best. He tolerated nothing less. He expected you to do extra work. If you left the gym early, he knew it.”

The starting lineup had Ronnie Kingery at point guard, Vic Lewis and Doug Curry were the forwards, Jim Harper was the center, and Junior Waldo and Joe Blazer were also in the starting mix.

Even though Curry and Heinz graduated, the Dragons went 25-2 the next season.

York originally played safety for the Marshall football team before an injury shortened his career. He switch to basketball and played for the legendary Cam Henderson.

York, who died in 1994, and his wife Barbara had three daughters, Beverly, Sharon and Linda.