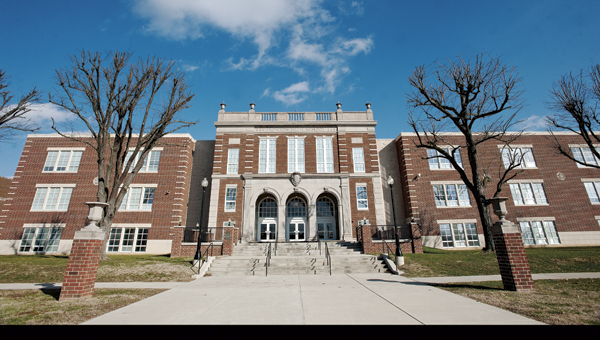 It’s a topic on the minds of many Ironton parents — Is my child getting a quality education?

With concerns and opinions at the ready, those parents, as well as teachers and community members, had the opportunity to have their voices heard at an open house for strategic planning Thursday at Ironton High School.

Though the opportunity was there, few chose to take advantage, leading some in attendance to wonder if their opinions would really matter in the long run.

“How do we get more community involvement? asked one grandparent. “I’m ashamed to have 23 people at a meeting that affects our children.”

“Are they not involved because they think everything is honky dory? Franklin said. “How many people do you get to a football game? What interests them in football that doesn’t interest them in a meeting like this? … I don’t know how to answer your question. That is endemic. Maybe you need a tragedy like Sandy Hook to get community involvement. I don’t think you want to have that here. But I think what we need to do, a strategy or a goal is get more community involvement.”

On Saturday, Superintendent Dean Nance, who did not attended the meeting at the request of AEI, said he would have like to have had more participation from the community, but was pleased to hear that those in attendance gave suggestions and ideas.

“I heard there was more than 25 and I would have hoped for more, but at least that’s 25 people that were willing to give their evening to give us their thoughts and ideas on how we can become better,” Nance said. “…I take it as a bit of a vote of confidence that we didn’t have 200 people that all thought there was something going majorly wrong in the school. I think that we were proactive in at least offering the opportunity. I think it was a good move on the board’s part I think that we will become a better organization through this process.”

What is strategic planning?

“Simply put, strategic planning is the beginning of the quality cycle and probably the most important process any organization can take as it moves forward, and if the organization (school district) is committed to quality it will never end,” Franklin said. “Too often, organizations get caught up in the day to day operations that they don’t take time to reflect on where they are and where they want to go.”

The concept of forming a strategic plan isn’t a new one in Lawrence County.

In 2009, the Chesapeake school district unveiled its strategic plan, outlining a new mission statement and nine core values: A desire for personal success; the need for lifelong learning; the potential and self worth of all people; the need for a sense of purpose; the understanding that progress needs risk and change and that partnership bring about excellence; high expectations and growth; and the responsibility of the individual for his choices.

From the beginning phases to developing the plan took about two years and the formation of the Chesapeake Core Planning Team, led by national school consultant Dr. Steven Barone of Transformation Systems Inc.

Like what AEI will do for the Ironton district, Transformation Systems helped the Chesapeake district to analyze data and pinpoint the district’s accomplishments and deficiencies.

Franklin said the Ironton school board approached him last summer to begin the process of devising a strategic plan for the district.

“Your board is interested in moving this school district forward,” he said. “They care about quality. They wouldn’t have hired us if they didn’t.”

Despite the low turnout, the couple dozen people in attendance had plenty to say about the direction the Ironton City Schools District should be headed in.

After a brief introduction by Franklin, participants broke off into five different groups to talk about mission, vision and values; operational issues; curriculum and educational technology; extracurricular and out-of-class experiences; and community relations.

The groups were led by consultants from AEI and all comments were confidential.

Neither Ironton School Board members nor Superintendent Dean Nance attended the meeting so people could speak freely without fear of judgment.

“The team Dr. Franklin assembled had asked board members and administrators not be in attendance so people may speak freely and not fear that someone will form an opinion or a negative thought because of an idea they may not have agreed with,” Nance said. “This helps having a facilitator and it helps organizing these ideas and any organization without a strategic plan is essentially wandering and we want to have a plan.”

Before the evening began, Nance said he hoped stakeholders, parents, citizens, grandparents and taxpayers, would give their opinions and fresh ideas on how the district should operate.

“I don’t want to equate what we do with kids to an inanimate object, like making cars, but Chevy makes cars and if they don’t go out and ask, ‘what did you like about this car, what’s wrong with this car, how can we improve this car,’ they are going to make the same car over and over and over,” Nance said. “This is kind of like asking for input on our product. My hope is there will be lots of ideas that we can implement and become better.”

Franklin said all the information gathered at Thursday night’s session would be compiled in to common themes.

One of the themes apparent in several of the groups was communication.

Parents in the group discussing operational issues said communication with their child’s teachers was usually good, with teachers replying to emails and making themselves available for questions.

Some parents also noted that the automated voice messaging service was helpful.

However, many people didn’t feel school events, such as open house and the strategic planning meeting itself, were communicated well.

Many said they have found out about events by word of mouth, while some say they read about it in the newspaper.

For others, communication was lacking in regards to what was expected of their children academically.

One woman said, as a new parent, she didn’t feel prepared or informed about her child’s educational requirements.

“I’m just getting started. I’m the parent of a first grader, so this all very new to me. What I hear as far a curriculum and what’s going to be expected because of changes in state law. I’m not a teacher so I don’t know what the curriculum is,” said the woman. “But I’m not seeing my child doing the same work that other districts are doing. And she is going to be tested in the third grade and I’m not aware of what that means and what’s going to be different.”

“Look at all the kids that go to Ironton and look at how many parents showed up,” noted one parent about the lack of attendance.

Another said she didn’t feel the schools reciprocated the support that the community shows by attending events like football games.

“The history classes may want to go to a museum, like we have right here in town,” the parent said. “But they take them to Columbus to a museum and they will only take certain ones. And here, we have one right here in town, and they don’t come. There is a lot of education right here. They would rather go to Columbus or Cincinnati. We all go to the football games and the basketball games. We all support the school. Why doesn’t the school support Ironton, the community?”

There was one student in attendance, a freshman, who said he wanted more classes that offer practical, real-world applications.

In the weeks that follow, Franklin said the data compiled from the breakout sessions would be transformed into a survey to be sent out to teachers, students and administrators.

Franklin also said he would like to talk to the principals of the school as well as students to get their input.

“We will take all of this data, all of the data from the surveys and we will sit down with the board (of education) and try and develop a vision,” he said. “After that we will take our time and write a report. And the report will literally be, the idea is, what did you see, what do you think would make it better, and then creating the strategies to make it better.”

Franklin said the plan is to have a complete strategic plan with vision, strategic priorities, strategies, and action plans in the board’s hands by the end of April.

Lawless to ask for more in 2013 budget    What the Lawrence County Commissioners decide on Thursday may determine if... read more