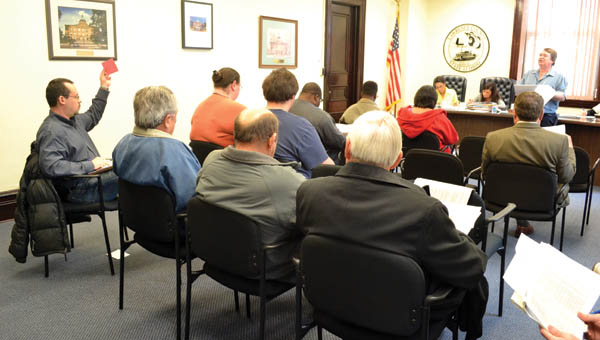 Lawrence County Treasurer Stephen Burcham reads off a list of liens for sale during the county’s latest tax lien sale at the Lawrence County Courthouse. Potential buyers do not bid on the taxes or property but on an interest rate they may receive if the property owner redeems the parcel after the lien is sold.

With the fifth tax lien sale over, the county has received $3 million in back taxes since the sales began three years ago.

On Monday morning Lawrence County Treasurer Stephen Burcham conducted the latest sale in county commission chambers where 39 tax liens were sold. That brought in $79,919 in back taxes and administrative fees.

In a tax lien sale potential buyers do not bid on the taxes or the property but on an interest rate they may receive if the property owner redeems the parcel after the lien is sold.

That interest rate begins at 18 percent and goes down by quarter percent. All bidders must put down $500 in cash before the sale and pay at least 10 percent of the back taxes, administrative costs, penalties and interest the day of the sale. Bidders have until the end of the week to pay the balance.

After one year the owner of the lien can foreclose if the parcel owners does not redeem the property. Then it would be offered at a sheriff’s sale and the lien holder would get reimburse for taxes, interests, administrative and legal cost he or she has paid. If the parcel does not sell after being offered twice at a sheriff’s sale, then the title would go the tax lien holder.

However before the Monday sale owners of 1,096 parcels that had been scheduled for the auction block either paid all the back taxes or set up taxes on a contract. That brought in $1.9 million prior to the sale.

“Not a whole lot was sold, but it drove a lot of people to take care of their obligations,” Burcham said.

Out of the 12 potential buyers who registered, nine bought liens. The most liens bought were nine by Kellico Inc., that brought in $38,521. Eight of those liens were on parcels owned by Advanced Machine and Fabrication. One of those parcels had taxes of approximately $23,000.

All buyers were from the Tri-State, except for Jericho Holdings from Riverdale, N.Y., which purchased liens on 13 parcels totaling $15,181 in taxes.

For the remaining 569 liens not sold, Burcham will consider offers from four companies interested in making bulk purchases.

“We will be providing an updated list by the end of the month requesting they submit a bid for all or some of the remaining liens,” Burcham said.

“They can choose which parcels they wish to submit bids on and the terms of their bids, which would include the interest rate and we would evaluate those and decide to accept or reject them,” the treasurer said.

The treasurer’s office also plans to have one or two more tax lien sales this year.

PROCTORVILLE — An opportunity for Tri-State book lovers to show their support for an area author is just around the... read more