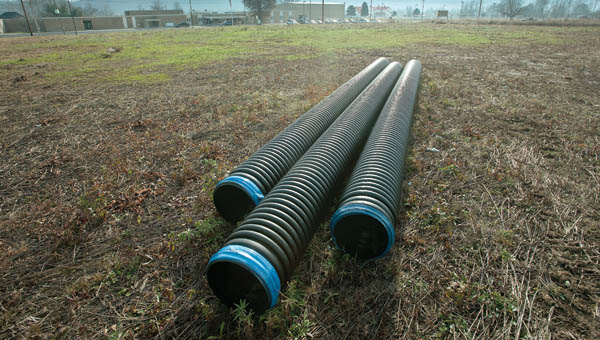 Plastic tubing lies in an open field across from the Fairland East Elementary School. The site is being considered for a senior home facility.

ROME TOWNSHIP — A senior citizen housing complex could be on the horizon for the Proctorville area now that the Lawrence County Commissioners have given a tentative OK to help with the cost of sewer service to the project.

A Cleveland-based developer wants to build a complex with 40 to 50 units on a site across from Fairland East Elementary School. The project, which is being touted as affordable senior housing, is expected to cost $8 million and would be done in partnership with the Ironton-Lawrence County Community Action Organization.

“The determining factor for moving forward is the availability of sanitary sewer,” Ralph Kline of the CAO, told Commissioners Bill Pratt and Freddie Hayes Jr. at the Tuesday work session. Commission President Les Boggs was absent.

To provide that service the current line from the Union-Rome Sewer System to the proposed site must be extended for about 7,500 feet at an approximate cost of $450,000.

“This is not a given,” Kline said. “We are still in negotiations with the developer. Could we get a commitment from the county of at least getting the sewer there?”

Pratt, who spoke in support of the project, said he would like the line to be capable of servicing additional expansion in that area.

Kline’s proposal was a commitment of $100,000 from the county from Community Block Development Grant funds to add to the CAO agreeing to waive developer fees and the developer’s own investment in the expansion line.

“If this is the direction you would want to go, we would need to have a letter from the county commission to assist,” Kline said. “(The developer) would have to commit his dollars to it. He feels good about the project site.”

If the complex was built, there could be a satellite senior center there comparable to the one the CAO operates at the Park Avenue Apartments. It could also be a location for congregate meals as once were served at the former Sybene Senior Center, Kline said.

Pratt gave Kline the go-ahead to draft letters of support from the commission to the developer on the financial support for the sewer line extension.

Those letters will be presented to the commission at its Jan. 24 meeting when the developer will present tentative plans for the complex. Later that day the developer will hold an open house at the site for the public to explain the project and answer questions.

Road deputies expected to be cut Layoffs could start this week at the Lawrence County Sheriff’s Office with road deputies... read more