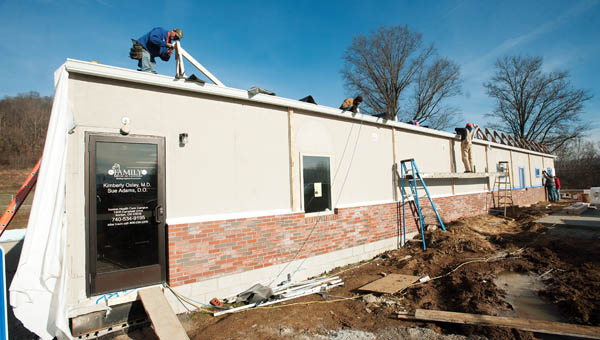 ROME TOWNSHIP — Two dental units are ready for inspection at the new CAO medical clinic being built in the eastern end of Lawrence County.

In the fall modular units were moved to a site across from the Fairland East Elementary School for a clinic that will offer family medicine and dental practices.

Those units were originally used by doctors at the site of the new St. Mary’s Medical Center-Ironton Campus while it was under construction. After the Ironton campus opened in July, the CAO decided to use the units to expand medical services in the Rome Township area.

“There is a portion of them open,” Ralph Kline of the Ironton-Lawrence County Community Action Organization, said. “We have a doctor out there seeing patients. We are adding to the dental and are finishing up site work. Once we get everything, we will have an open house.”

The eastern end expansion along with providing a family practice clinic at Aid was funded by $650,000 in federal funds that the CAO was awarded in June. The funds came from the U.S. Department of Health and Human Services Health Resources and Services Administration.

The Aid facility was formerly a clinic used by King’s Daughters Medical Center, which now leases it to the CAO. That clinic, which opened in the fall, had already been the site for outreach by the CAO.

Target opening for the Rome clinic had been slated for October of last year.

“There were typical delays,” Kline said. “We had enough site work done where we had the parking lots before the asphalt plant shut down. We will try to do some other services, probably have a pediatrician.”

Tonight the Ironton City Council will consider whether or not to ask voters to consider another recreation levy for the... read more