Wreaths Across America organizers gearing up for second year of event 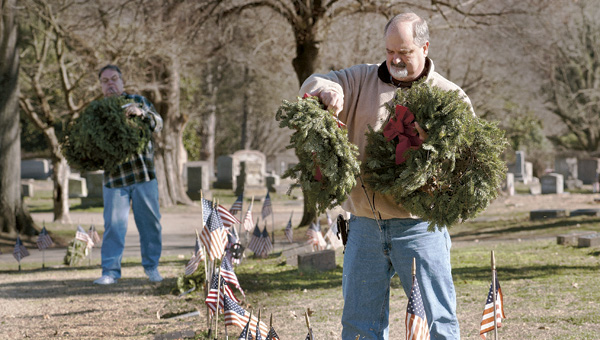 Herb Brown, right, and JB Miller, left, pick up decorations off the military graves at Woodland Cemetery. The wreaths were placed by Wreaths Across America in December.

On Saturday, volunteers removed the wreaths from the veterans section at Woodland Cemetery as the last phase of the month-long Wreaths Across America came to an end.

But organizers are already planning for a second year of the service that honors those who gave their lives to their country. Juanita Southers, who with friend Linda Dalton, brought the inaugural event to Ironton, has received authorization for next December’s Wreaths service from the Woodland Cemetery board.

“We are all set to go,” Southers said.

On Dec. 15, 300 wreaths were placed throughout the section where more than 900 veterans are buried during a ceremony where representatives from all branches of the military participated.

“I think with everybody’s help, we will be able to almost cover all of them this year,” Southers said. “The response has been so good. I have not had word one of negative comment.”

Wreaths Across America is a national event held on the third Saturday of December where tens of thousands of veterans’ graves are decorated with live wreaths. They stay on the graves for a month and then are removed.

The cost for each wreath is $15 and an account, set up at Citizens Deposit Bank, remains open for contributions to fund the 2013 Wreaths ceremony.

“I have had several businesses say to notify them in May and they will donate or increase their donation,” Southers said. “Most of the wreaths this time were bought by individuals.”

The local organization plans to have several fundraisers throughout the year and has already received a commitment for a donation from a Tri-State hospital.

Contributions can be sent to Citizens Deposit Bank at 221 Railroad St., Ironton, OH 45638 with checks made out to Wreaths Across America.

Seven jobs from the state side of the Ohio Department of Job and Family Services will be moved to Chillicothe... read more