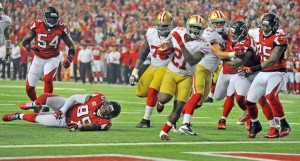 San Francisco 49ers running back Frank Gore(21) slips into the end zone for a touchdown during the third quarter of the NFC championship game at the Georgia Dome on Sunday in Atlanta, Georgia. The 49ers defeated the Falcons, 28-24. (MCT Direct Photo)

The San Francisco 49ers are ready to start a new dynasty with a familiar formula.

Next stop, the Big Easy.

Colin Kaepernick and Frank Gore led San Francisco to a record comeback in the NFC championship game Sunday, overcoming an early 17-0 deficit to beat the Atlanta Falcons 28-24 and send the 49ers to their first Super Bowl since 1995.

Gore scored a pair of touchdowns, including the winner with 8:23 remaining for San Francisco’s first lead of the day, and the 49ers defense made it stand up. A fourth-down stop at the 10-yard line denied Atlanta another stirring comeback after blowing a big lead.

“Everybody does a little,” 49ers coach Jim Harbaugh said, “and it adds up to be a lot.”

San Francisco (13-4-1) moves on to face Baltimore at New Orleans in two weeks, looking to join Pittsburgh as the only franchises with six Super Bowl titles. It’ll be a brother-vs.-brother matchup, too, since John Harbaugh coaches the Ravens.

Joe Montana led the 49ers to four Super Bowl wins and Steve Young took them to No. 5. It’s up to Kaepernick and Co. to get No. 6.

“He just competes like a maniac all the time,” said Harbaugh, whose much-debated decision to bench Alex Smith at midseason now looks like the best move of the year.

Harbaugh was hoppin’ mad when a disputed call went against the 49ers on Atlanta’s potential winning drive. He leaped in the air, screamed at the officials and had to be restrained by his staff from charging the field.

No complaints when it was over.

“We rose up there at the end,” Harbaugh said.

His second-year quarterback, who runs like a track star, didn’t get a chance to show off his touchdown celebration — flexing his right arm and kissing his bicep, a move that quickly became a social media sensation known as Kaepernicking.

But he shredded the Falcons through the air by completing 16 of 21 for 233 yards, including a 4-yard touchdown to Vernon Davis, and had them so worried about his running ability out of the spread option that Gore and LaMichael James had plenty of room.

Gore scored a pair of touchdowns, including the game winner with 8:23 remaining for San Francisco’s first lead of the day. Davis scored the first TD for the 49ers on a 15-yard run.

“I take my hat off to Atlanta. They played hard. They’ve got a great team,” Gore said. “But we fought, man. We fought and we deserved it.”

The 49ers pulled off the biggest comeback victory in an NFC championship game, according to STATS. The previous NFC record was 13 points — Atlanta’s victory over Minnesota in the 1999 title game, which sent the Falcons to what remains the only Super Bowl in franchise history.

The AFC championship game record is 18 points, when Indianapolis rallied past New England in 2007.

Harbaugh is hardly cool and collected like the 49ers’ first Super Bowl-winning coach, Bill Walsh, but has pulled off a similar turnaround in San Francisco. The 49ers had eight straight years without a winning record before their new coach arrived from Stanford in 2011.

He immediately led San Francisco to the cusp of the Super Bowl, losing to the eventual champion New York Giants in overtime in last year’s NFC title game, a bitter defeat at home set up by a fumbled return.

This time, the 49ers were the ones winning on the road to set up another celebration in the city by the bay, which is rapidly becoming the new Titletown USA. They’ll try to follow the lead of the baseball Giants, who won the World Series in October.

“We’ve come full circle,” said Denise DeBartolo York, part of the family that has owned the 49ers since their championship days, “and the dynasty will prevail.”

Kaepernick guided San Francisco on a pair of second-half scoring drives that wiped out Atlanta’s 24-14 lead at the break. Gore scored on a 5-yard run early in the third quarter, then sprinted in from 9 yards out for the winning score with 8:23 remaining after each team made crucial mistakes to ruin potential scoring drives.

On both of Gore’s TDs, the Falcons had to worry about Kaepernick running it in himself. They barely even touched the running back on either play, and James scored pretty much the same way.

“I kind of figured that coming in and they showed that on film, so I assumed Frank and LaMichael were going to have a big day,” Kaepernick said. “Frank ran hard today, and I can’t say enough about him.”

The top-seeded Falcons (14-4), in what appeared to be the final game for Hall of Famer-to-be Tony Gonzalez, tried to pull off another season-extending drive. But, unlike the week before against Seattle, they needed a touchdown this time.

They came up 10 yards short.

On fourth down, Matt Ryan attempted a pass over the middle to Roddy White that would have been enough to keep the drive going. But linebacker NaVorro Bowman stuck a hand in to knock it away with 1:13 remaining.

The 49ers ran off all but the final 6 seconds, not nearly enough time for Ryan to pull off his greatest comeback yet.

In the divisional playoffs, the Falcons blew a 20-point lead in the fourth quarter, the Seahawks scoring the go-ahead touchdown with 31 seconds remaining. But Ryan completed two long passes, setting up Matt Bryant’s 49-yard field goal for 30-28 victory.

The Falcons came up short of their second Super Bowl, leaving the 1995 Braves as the city’s only major sports champions. This one figures to hurt for a while.

“We didn’t make the plays when we had the opportunity,” Falcons coach Mike Smith said. “There were five or six plays, like in most hard-fought games, that make a difference. There were ebbs and flows and changes in momentum, and they made more plays than we did.”

Kaepernick, who ran for 181 yards against the Packers the week before to set an NFL playoff record for a quarterback, didn’t have much chance to use his legs against the Falcons. He broke off a 23-yard gain, but was thrown for a 2-yard loss the only other time he carried the ball.

But Kaepernick showed he’s more than a runner. His favorite receiver was Davis, who hauled in five passes for 106 yards.

Ryan finished 30 of 42 for 396 yards, by far the best performance of his playoff career. But his postseason record dropped to 1-4, done in by two big miscues — an interception and a fumble — in the second half.

Julio Jones was Ryan’s leading target most of the day, finishing with 11 catches for 182 yards and a pair of touchdowns. He hauled in a 46-yarder less than 4 minutes into the game, then made a dazzling grab in the left corner of the end zone for a 20-yard score. He got his left foot down, then planted his right foot about an inch inside the line — while cornerback Tarell Brown was all over him.

Ryan threw a 10-yard touchdown pass to Gonzalez with 25 seconds remaining in the first half after the 49ers had cut the deficit to 17-14. It seemed the home team had reclaimed the momentum heading to the locker room, but, amazingly, that would be its final score of the day. The 49ers quickly seized control on the opening possession of the second half, driving 82 yards in just seven plays for Gore’s first TD.

After a nearly perfect first half, in which Ryan was 18 of 24 for 271 yards and those three TDs, the quarterback known as Matty Ice made a couple of crucial blunders.

First, he tossed a pass that was picked off by Chris Culliver, halting a drive in 49ers territory. Ryan ripped off his chinstrap in disgust.

Then, with the Falcons in scoring range for at least a field goal, Ryan failed to grab a shotgun snap, appearing to take his eyes off the ball before he caught it. The ball squirted away and Aldon Smith recovered for the 49ers at their own 37.

“Against a good team, you can’t have those kind of mistakes,” Ryan said.

San Francisco also squandered some chances. Struggling kicker David Akers clanked a 38-yard field goal try off the upright, and Michael Crabtree fumbled just short of the goal line, the ball stripped away by Dunta Robinson and recovered by Stephen Nicholas. But, after that big defensive stop with 13 1-2 minutes remaining, the Falcons went three-and-out.

The 49ers drove for the winning touchdown.

Atlanta took the ensuing kickoff and used up nearly all the clock while going 70 yards. The Falcons might have reclaimed the lead if Harry Douglas had been able to stay on his feet while hauling in a 22-yard pass.

The defender slipped, and so did Douglas, but he held on to the ball. Harbaugh thought it touched the turf and challenged the call, then launched into his tirade when the officials let it stand. It all worked out, though.

As for the 36-year-old Gonzalez, who said all year he was all but certain this would be his final season, it sure sounded like the end.

“I’ve had such a great life,” he said. “I wish it would’ve culminated with the Super Bowl, but it didn’t.”