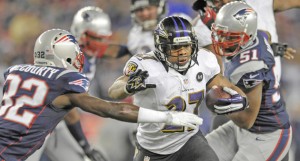 The ball — and the rematch — went to the Ravens.

A year after the New England Patriots took advantage of a dropped touchdown and a missed Baltimore field goal to advance to their fifth Super Bowl in 11 seasons, the Ravens held on for a 28-13 victory on Sunday in the AFC championship game.

“You have the opportunity to win the game and we came up short,” Brady said. “There’s frustration in that we wish we could have done better. But they’re not going to give it to you. We didn’t earn it; they earned it. They played a good game.”

The Ravens and Patriots also met in the 2010 wild-card round, when Baltimore won 33-14. Last year, the Patriots won when Lee Evans dropped a potential game-winning touchdown in the end zone with 27 seconds left and then missed a 32-yard field goal that would have forced overtime.

“It seems like every year, it’s us and them always fighting at the end,” Patriots defensive lineman Vince Wilfork said. “You’re looking at two good organizations, two good football teams, so I’m not going to downplay them one bit. They’re a great football team. You know, the best team won tonight.”

The Patriots took a 13-7 lead on a 25-yard field goal right before the half, but Baltimore took advantage of injuries that depleted the New England pass defense to outscore New England 21-0 in the second half.

Joe Flacco, who had just 81 yards passing at halftime, led Baltimore on a 10-play, 87-yard drive in the third quarter to take the lead. He then added a pair of touchdown passes to Anquan Boldin on back-to-back possessions to start the fourth.

Brady led New England down the field, completing six of seven passes in one stretch, before three straight incompletions turned the ball over on downs. After forcing a three-and-out, Brady connected with Wes Welker for a 36-yard catch-and-run but his next pass was tipped into the air by lineman Pernell McGee.

Ellerbe waited for it to come down and then cradled it in his arms as he went voluntarily to the turf, surrounded by a pair of celebrating teammates.

Baltimore ran 4 1/2 minutes off the clock — while gaining just 27 yards — before punting the ball back to the Patriots with 2:05 left to play. Brady brought New England to the Baltimore 22 before his pass into the end zone was intercepted by Cary Williams with 66 seconds left.

“Everybody just stuck together and stayed positive and continued to play the way we normally do,” Williams said. “Eventually, Tom Brady made a couple of mistakes and we were able to capitalize on them.”

Brady completed 29 of 54 passes for 320 yards and a touchdown, passing Brett Favre and moving into first place on the NFL’s career postseason list with 5,949 yards passing. He is 5-3 in his eight games against the Ravens, including the playoffs, but his statistics against them are among his worst against any team.

The Patriots, who had the highest-scoring offense in the NFL this season, were held to a season-low point total in their finale — more than 20 below their average.

Welker had eight catches for 117 yards, and Stevan Ridley ran for 70 yards on 18 carries before leaving the game following a fourth quarter carry in which Bernard Pollard hit him in the head so hard that he fumbled away the ball.

“That was the turning point of the football game there on the 40-yard line,” Ravens coach John Harbaugh said. “It was a tremendous hit. It was football at its finest. It was Bernard Pollard making a great physical tackle, just as good a tackle as you’re ever going to see in football right there. That probably turned the game around right there.”

Cornerback Aqib Talib hurt his thigh and defensive tackle Kyle Love injured his knee. Backup safety Patrick Chung was helped off the field after one play.

Record-setting tight end Rob Gronkowski, who broke his arm twice during in the season, watched the game in owner Bob Kraft’s suite. After the game, Kraft patted Brady on the helmet as he walked off the field.

“It always comes to a screeching halt,” Brady said. “There’s only two teams that advance. Those two teams deserve it. We’ve lost before. It takes a while to get over.”

Harbaugh brothers to coach against each other in Super Bowl