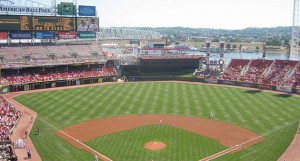 CINCINNATI (AP) — The Reds started a countdown to a 2015 All-Star game on Wednesday by breaking out the bunting and bursting into a standing ovation.

A few of them also started to dream about playing in it.

Commissioner Bud Selig awarded the midsummer game to Cincinnati on Wednesday, rewarding years of persistence by Reds owner Bob Castellini. The city hasn’t hosted an All-Star game since 1988, when the Reds played at Riverfront Stadium.

“I can’t imagine what’s going to happen, but I think it’s going to be beautiful,” said second baseman Brandon Phillips, a two-time All-Star under contract through 2017.

The Reds lobbied hard for years to get the game.

It’ll be the fifth time that the game is played in Cincinnati, which was the stage for one of the most memorable All-Star moments. Pete Rose bowled over Indians catcher Ray Fosse to win the 1970 game at Riverfront Stadium.

The 1988 game was something of a disappointment. Rain wiped out the home run derby events, and the American League won the game 2-1 a day later with the winning run scoring on a sacrifice fly.

The Reds moved into Great American Ball Park in 2003. Castellini became controlling partner in the ownership group after the 2005 season and was determined to bring the game back to his home city.

It’ll be played in New York this year, followed by Minneapolis in 2014.

“I’ll say one thing for Bob: Man, he is persistent,” Selig said.

“I could use a couple other terms to describe him. One starts, ‘A pain in …’ But tenacity is a great virtue.”

Baseball’s oldest professional franchise has enjoyed a renaissance in the last few years. Under Castellini’s leadership, the Reds reached the playoffs twice in the last three seasons, ending a 15-year postseason drought.

The franchise hosted the Civil Rights Game in 2009 and 2010, impressing Major League Baseball with its handling of one of its premier events. Former Reds shortstop Barry Larkin was inducted into the Hall of Fame in Cooperstown, N.Y., last summer, putting the spotlight back on the franchise.

“If we’d been able to bring the Reds along to where they’re a perennial contender — which we feel we’re on the verge of doing — that has to be the biggest challenge we’ve had in this ownership,” Castellini said. “Then to have a jewel of having the All-Star game — we can only surpass that by having the World Series.”

Selig informed Castellini a few months ago that it appeared Cincinnati would get the 2015 game. The Reds brought business and community leaders, along with fans and members of the front office, to the announcement at the ballpark on Wednesday.

They gave a 30-second standing ovation when Selig announced the All-Star choice. The videoboards on the field lit up with the news.

Phillips, outfielder Jay Bruce and manager Dusty Baker were among those seated at the front of the room.

“It’s only fitting that we get it here very quickly,” Hall of Fame second baseman Joe Morgan said. “One of the things I missed in my career — I didn’t miss much — I never got a chance to play an All-Star game in the city I was playing in. Brandon and Jay, you guys will get that opportunity. And Dusty, you’ll get a chance to manage.”

Baker returns this season on a two-year deal. He would manage the NL All-Star team if the Reds won the league title in 2014.

Bruce and Phillips have each played in two All-Star games. They heard Morgan talk about what he missed as a player and started thinking about what it would be like to be introduced as an All-Star in their ballpark.

“It would be nice,” Phillips said. “If I’m not starting, then I have a problem. That’s just how I look at it. To bring the game here, it’s nice for the city more than the players. To hear Joe say he never played (an All-Star game) in Cincinnati — maybe I can say I did.”

Mayor Mark Mallory, who holds a special place in baseball blooper lore, noted that he started pushing to get an All-Star game in 2003. He said that Selig awarded it despite his opening day gaffe in 2007, when the major’s ceremonial pitch stuck in his hand and bounded up the first base line.

The toss is shown in video collections of worst ceremonial pitches.

“That was a tough day,” Mallory said. “My good friend Bob Castellini tried to console me that day. He put his arm around me and told me nobody’s going to remember this tomorrow. Nice try, Bob.”

Selig also announced that Major League Baseball was donating $1.5 million toward an urban youth academy in the city. It’ll be baseball’s seventh such academy, the first in the Midwest. It provides free instruction in baseball and softball, and has educational programs.

Jim Walker jim.walker@irontontribune.com   When Larry Goodwin was a small boy living near the old Beechwood Park, he would ask... read more