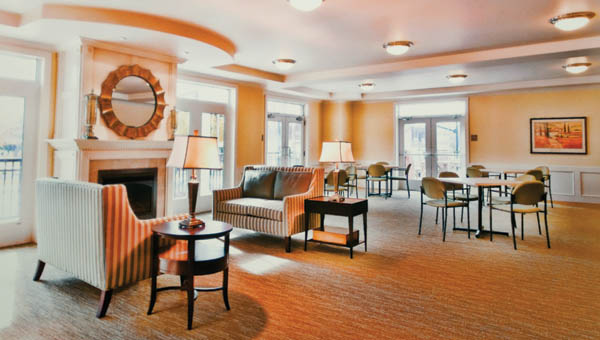 Examples of what the future Rome Township Senior Housing complex could look like.

Support for a possible senior citizen living complex on the county’s eastern end was made formal by the Lawrence County Commission Thursday at its regular meeting.

The commissioners, after hearing from Ralph Kline of the Ironton-Lawrence County Community Action Organization and David Burg of PIRHL Developers, approved $100,000 in Community Block Development Grant funds to help with a sanitary sewer line expansion.

According to Kline, funding the sewer line is one of the biggest challenges in developing the site, which if built, would be adjacent to the new St. Mary’s Medical Center modular clinics across from Fairland East Elementary School in Proctorville. To provide that service, the current line from the Union-Rome Sewer System to the proposed site must be extended for about 7,500 feet.

“We worked out a plan to where the county put $100,000 in this as far as block grant dollars and we’d be seeking some ARC (Appalachian Regional Commission) and some other dollars to help offset the costs of that. It’s like a half million dollar sanitary sewer line. We need an application showing that we would be able to have a sanitary sewer to propose with this project should we get tax credits for it to be built.”

Commissioners Bill Pratt and Les Boggs both approved the letter of support. Commissioner Freddie Hayes abstained from the vote because he owns the property where the senior complex would be built.

The application for tax credits for the project must be submitted to the Ohio Housing Finance Agency by Feb. 15. Kline said he expected a decision by mid-June.

If all goes according to plan, ground could be broken by the spring of 2014 with the facility open for rental in 2015.

Burg said at the meeting that PIRHL Developers work closely with municipalities and have been working with the CAO to fill a need in Lawrence County.

“Eastern Lawrence County had a dearth of age-restricted senior housing,” he said.

To date, PIRHL Developers, based in Cleveland, has developed 27 housing properties in eight states.

The site in Proctorville would be 40 to 50 units, affordable housing complex for seniors age 55 and older. The projected cost is $8 to $8.5 million.

Kline said tax credits would make the apartment units affordable for seniors with little to no income. The projected cost for a single-occupancy unit would be $450 to $625 per month with some utilities included.

In addition to housing, the complex would provide a site for congregate meals and possibly a health and wellness center.

Burg also said the parking lots may be redesigned for bus route access.

“It’s a great project,” Pratt said. “We appreciate you coming from Cleveland to speak to us.”

After the meeting, Hayes said he fully supported the senior complex project.

Thursday afternoon, Burg and Kline hosted a public input meeting during the open house for the new St. Mary’s Medical Center campus in Proctorville to show off proposed plans for the apartments and senior services facility.