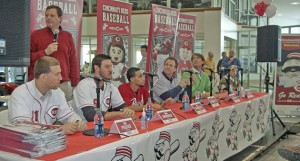 SUMMIT, Ky. — The Cincinnati Reds had a good season last year. But in the eyes of the players, organization and fans, it wasn’t good enough.

The annual Cincinnati Reds’ Caravan visited the Tri-State area Thursday with a stop at Fannin Motors. Reds’ fans were bursting with anticipation and the players and other Reds’ personnel matched their enthusiasm for the upcoming season.

The Reds won the Central Division last year and had a 2-0 lead in the Divisional Series only to watch San Francisco rally to win the series 3-2 and go on to win the World Series.

“If we would have got in the World Series, we’d have brought home a world championship,” said former Reds super scout Gene Bennett, a native of Wheelersburg.

“It’s tough,” said Frazier. “We did win our division. We had a great year and met one of our goals. That’s baseball. It’s time to move on and try and win again this year.”

Brantley said the Reds have made the right moves in the off-season to improve the team and to set themselves up for another title run. He said the untimely injury of pitching ace Johnny Cueto before the first game of the San Francisco series was critical.

“The biggest issue this year is staying healthy and just play ball,” said Brantley. “It would have been a lot different (in the playoffs) if Johnny Cueto wasn’t hurt in San Francisco.”

Williams said the Reds plan to give relief ace Aroldis Chapman a chance to be a starting pitcher. He said the bullpen remains the best in baseball with pitchers like Jonathan Broxton, Sean Marshall, Sam LeCure and Ondrusek.

Broxton and Ondrusek have recently signed new contracts to remain with the Reds.

“Our left-handed relief is a little short-handed, but the focus is getting guys out,” said Williams. “Statistics show our right-handed pitchers had a lot of success against left-handed batters. We’re 100 percent ready to go.”

“If you get them out, that’s all that matters, even if you kick it up there,” said Brantley.