Frazier anxious for his chance to play 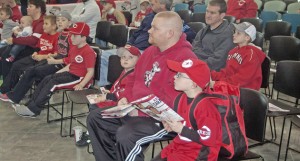 Craig Harvey and his sons, Tyson, left, and Darryn, right, sit and wait for their chance to get autographs from Cincinnati Reds players during Thursday’s caravan stop at Fannin Motors in Ashland, Ky. (Jimmy Walker / The Ironton Tribune)

SUMMIT, Ky. — To Todd Frazier, pressure is a more of a challenge than a threat.

Last season during a road trip in Pittsburgh, Frazier and teammate Ryan Ludwick were dining in a restaurant. Frazier noticed two women trying to help a man who appeared to be choking on a steak.

Frazier went to their table, told the women to step aside and he performed the Heimlich Maneuver and saved the man’s life.

His calm demeanor under pressure was just as evident on the playing field.

“My high school coach always told me to act like I’d been there. I get comfortable pretty quickly,” said the 26-year-old Frazier.

“It’s my turn. I’m ready. It’s my opportunity and I’m ready to take over.”

Frazier said several players helped him make the transition not only to the major league level, but playing third base on a regular basis including the player whose position he sub-planted, namely Scott Rolen.

“Scott Rolen, Miguel Cairo and Brandon Phillips all helped me. I look up to them,” said Frazier.

Last season Frazier appeared in 128 games playing third base, first base and left field. But he’s used to changing positions. He played shortstop in college at Rutgers.

Frazier hit .273 with 19 home runs, 67 runs batted in, 26 doubles, six triples and drew 36 walks in 422 at-bats. He finished third in the voting for the National League Rookie of the Year award.

“I set goals real high. When I’m as comfortable as I can be, I’ll take off,” said Frazier.

Frazier was the final player cut in spring training last season. But an injury earned him an early call-up to the major league team and he never returned.

Frazier spent most of his time at third base and left field until an injury to the Reds’ best player and first baseman Joey Votto sent him across the diamond.

“I prefer third base. But I don’t need much time to get ready (for another position). A little batting practice and a couple of days working out (at the position) and I’m ready,” said Frazier.

Not only did Frazier enjoy a good season last year, but the Reds had a good year as they won the National League Central Division title.

However, the Reds took a 2-0 lead in the Divisional Series only to lose three straight games to the San Francisco Giants, the eventual World Champions.

An injury to starting pitcher and team ace Johnny Cueto prior to the start of the series proved critical.

“It’s tough,” said Frazier. “We did win our division. We had a great year and met one of our goals. That’s baseball. It’s time to move on and try and win again this year.”

Todd Frazier plans to move on, even if he moves around.