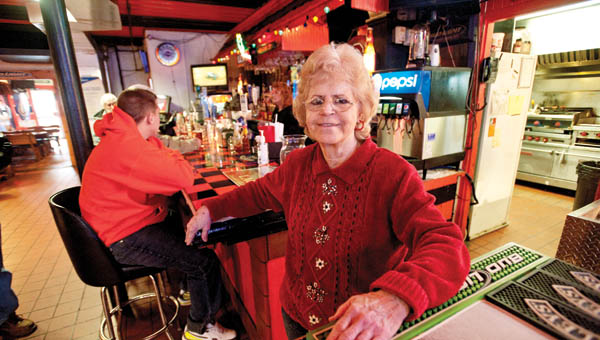 Bonnie Maynard celebrated her 70th birthday at her “home away from home,” Frogtown where she has spent the last 42 years working. Friends and family came together to celebrate with food, fun and a humorous birthday cake.

When Bonnie Maynard started work as a bartender at The Oasis on South Third Street, the price of a fishbowl beer was 30 cents.

Her beehive hairdo indicated that the popular styles were several inches higher back then as well.

Now, more than 40 years later, Maynard is still serving up those fishbowls to many of her loyal customers — these days at a cost of $3 each.

To show their appreciation, those customers, co-workers and the owners of the watering hole, now called Frogtown, celebrated Maynard’s 70th birthday with a surprise party and stories of years gone by.

It’s been told that Maynard has been a fixture at the Ironton business for so long, she had just been standing in an empty lot when the bar came to town.

“They built the building around her,” said co-worker Angie Swimm. “That’s what I’ve been told.”

Owners Mark and Darlene Rutledge took over the business in 2000 and renamed it Frogtown, and in doing so, say they inherited a top-notch bartender.

“If you’re sad and you come to work sad, you’re not going to be for very long,” Darlene said.

“She always has a joke,” Mark said. “She never forgets a joke.”

Maynard has been there through all the Rally on the River events and the Rutledges said the woman was always reliable, even if she had to come in at 2 a.m. unexpectedly.

For Maynard, working as a bartender for more than 40 years in the same location, she knows everyone by name and considers them her friends and family.

“I just like the people and I get along well with everybody,” she said. “I know all of them.”

Angie McKenzie has worked with Maynard for many years and considers her a second mother.

“I love her. She’s awesome,” McKenzie said. “She is good with people and always there to help you.”

Maynard’s impact doesn’t just extend to the staff of Frogtown, but to the customers as well.

Mark Howard, 61, said he has been a patron of the bar since he was 21 years old, and Maynard has always been there.

“She is humorous and fun and always courteous,” Howard said. “These days and times, that’s so rare.

“It’s like ‘Cheers,’” Howard said, referring to the old television show. “You wanna go where everybody knows your name. And she always knew our names.”

Frazier anxious for his chance to play

Craig Harvey and his sons, Tyson, left, and Darryn, right, sit and wait for their chance to get autographs from... read more