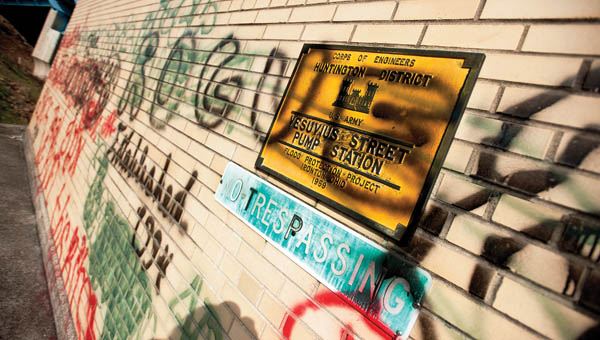 Vandalism was discovered at the Vesuvius Street Pump Station in Ironton over the weekend.

Police are on the lookout for vandals who defaced one of the city’s pump stations over the weekend.

Floodwall Superintendent Mike Pemberton and another city employee discovered pump station No. 5, under the Second Street overpass, was tagged with graffiti, most of which was profane, over the weekend.

“We found a little last week, but not as severe as what we found over the weekend,” Pemberton said.

The road that leads to the pump station has a locking gate, which Pemberton said was locked over the weekend, but is accessible to foot traffic.

The façade of the brick structure was covered with crude drawings of swords dripping with blood, various profanities and a hanged man with the words “Killen The Pigs.”

“We are the object, sometimes, they like to focus on,” Bowman said.

Bowman also said there were some names written in spray paint and that police would investigate those people as possible suspects.

More than just an inconvenience, Pemberton said the graffiti will cost the city unnecessary expenses to remove.

“We don’t have the manpower to go around and cover graffiti,” Pemberton said. “… It takes a lot of doing to pressure wash and repaint that whole building. We don’t need to be doing stuff like that”

Pemberton runs the city’s street, sanitation and flood control departments, and with limited staff, can’t afford to have to patrol the area for vandals.

“It’s just a shame that whoever did it, they don’t have anymore respect for people’s property,” he said.

Bowman said anyone with information about the vandalism is encouraged to contact the police department at (740) 532-2345.

With a maximum effective range of 54 yards, a standard 9mm handgun does not come close to comparing with standard... read more