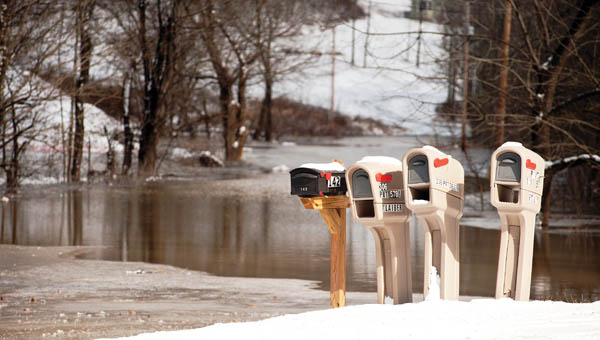 A row of mail boxes are perched just feet away from flood waters on Hog Run Road, County Road 181, in Upper Township.

The heavy snowfall that has caused motorists headaches over the weekend is packing a second wallop with the white stuff melting, flooding streets and roadways.

When the weather sends the Ohio River rising, that’s when the County Engineer’s Office goes on alert

“We start monitoring the Huntington (Ohio) river gauge on the NOAA website,” Cade said about his office’s standard procedure when flooding is expected. “It is generally accurate to within a foot. That gives us an idea of what areas are potentially going to close.

“We track the levels of what they are going to be, what they project the levels will be one or two days ahead of time.”

And the weather doesn’t have to be bad locally. The engineer’s office monitors any weather pattern that could affect the Ohio River drain basin.

Over the weekend the engineer’s office was looking at possibly seven roads that would be covered over. Cade’s office works in conjunction with the sheriff’s office and often 911 dispatchers will contact Cade or one of his superintendents.

“Once water makes the road impassable, we close the road,” Cade said. “We will physically check it. We want to verify if the gauge (report) is right.”

The first road to be hit with high water is Hog Run followed by two places on Lawrence Street.

“Basically Hog Run is the first road to close once the Ohio River becomes elevated,” he said. “As long as Hog Run has been there, for over 100 years, that road has flooded.”

“That was one of the wettest years on record,” Cade said.

However many of the roads are only closed for one to two days or an even shorter period.

“Some of those roads are going to be so close to the crest, they may be closed for just a couple of hours,” Cade said.

Correcting a problem area like Hog Run is theoretically possible, but in reality cost-prohibitive. At one time an estimate to correct County Road 181 was $1.3 million.

“The long-term solution is to raise the road but it is a very costly proposition,” Cade said. “We have applied for mitigation money in the past and been turned down.”