Watts steps up as water superintendent 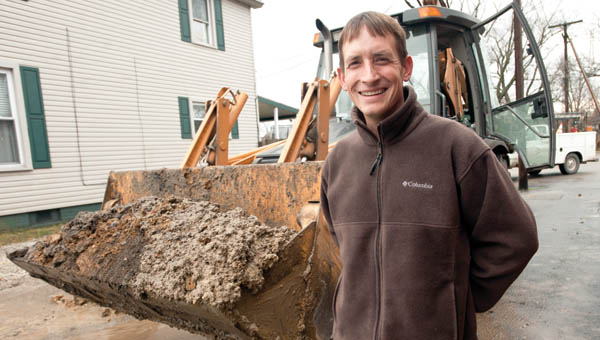 Ryan Watts is seen along South Third Street in Ironton at the scene of a water leak. Watts, an employee for the past 10 years, has been promoted to superintendent of the Ironton Water Department.

The Ohio River is a landmark, fishing spot and boating area. It is also Ironton’s water source.

Water is drawn from the river and runs through the various stations of the city’s water treatment facility. The man responsible for overseeing the process which gives the city residents clean water retired last month, setting the stage for one of the department’s own to rise up and take his place.

Ryan Watts, new Ironton Water Department superintendent, said he was fortunate to be groomed for the job by his predecessor, Mark White, before taking on the job.

“I knew taking over in his position would probably be the most challenging job I’ve ever had in my life,” Watts said. “There have been several employees over the years who have retired and (the positions) haven’t been filled. As such, Mark had to do a lot more than when he first started. He showed me the job, eased me into it and combined with the experience I’ve had here, working and having my hands in many of the things done here, I knew I would be OK.”

Watts came to Ironton in 2002 after receiving his bachelor’s degree in environmental engineering technology from Shawnee State University and said he could not have asked for a better way to start his career.

“Some people just come in, do their job and get their paycheck,” Watts said. “But, I got the qualifications I needed to move up. I’ve always looked ahead to the future and it has paid off.”

Watts said he looks forward to continuing doing good work with those whom he has worked day in and day out with for the past 10 years. He said he thinks one of the biggest things that will help him as the new superintendent will be already having a good relationship with those he works with.

“They are just a hard working group of guys,” Watts said. “They make my job much easier and I can’t imagine what it would be like without them.”

Ensuring the people of Ironton have clean water is something he takes pride in, Watts said. He said helping the community, learning more about his job and doing the best he can every day are some of the most important things he can do to continue succeeding professionally.

Teaching how to be kind