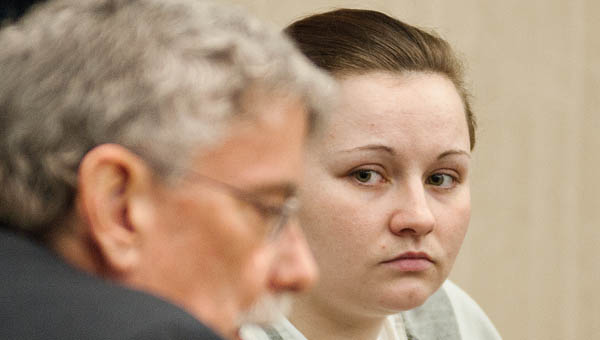 An Ironton woman accused of murder turned down her final plea offer Wednesday, leaving her fate up to a jury.

Ashley Seagraves, 23, who is listed as homeless, had one last opportunity to take a plea deal, which would sentence her to life in prison with the possibility of parole after 23 years for the shooting death of 53-year-old Delmar Jenkins and related crimes.

Instead, Seagraves will go to trial on Feb. 19 and, if convicted and given the maximum sentence, would not have the option of parole until after 40 years in prison.

Lawrence County Prosecuting Attorney Brigham Anderson explained his offer Wednesday in common pleas court and recommended the two indictments be consolidated for trial since the charges are related.

Seagraves is charged with murder and two counts of felonious assault on one indictment, and first-degree aggravated burglary and third-degree tampering with evidence on another. Judge Charles Cooper granted the motion to consolidate. The felonious assault charges will also be merged together.

The sentence for murder is life in prison with the possibility of parole after 15 years. Since Seagraves allegedly shot the victim, that adds a gun specification to the charge and with it, an additional mandatory three years to the sentence, making her parole eligibility only after 18 years.

Anderson also offered to sentence Seagraves to five years in prison for the aggravated burglary charge, which has a maximum penalty of 11 years. That would make her eligible for parole after 23 years.

Since Seagraves declined the offer, she could face the full 11 years for the aggravated burglary charge, as well as eight years for the felonious assault and three years for tampering with evidence, for a total sentence of life in prison with the possibility of parole after 40 years.

Seagraves was indicted by a Lawrence County Grand Jury in June 2012 after she was arrested for allegedly shooting the Elizabeth Township man while he slept. A later indictment in August charged the woman with allegedly taking a safe from Jenkins’ home the night he was shot. The safe was later recovered by authorities.

The charges of felonious assault stem from allegations that Seagraves attacked a jail matron using an item she fashioned into a sharp weapon and also trying to choke the jail matron.

Since her arrest, Seagraves has been held in the county jail on a $1 million bond.

The trial is expected to last four days.

Seven weeks after they adopted the 2013 budget, Lawrence County Commissioners are facing court orders from two officeholders that could... read more