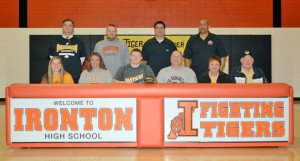 Aaron Stephens, meet Ohio Dominican. Nice to meet you. Would you like to play some football?
The meeting between the Ironton Fighting Tigers 6-foot-3, 215-pound two-way senior end and the coaches at Ohio Dominican went from an awkward introduction into a promising relationship.
Stephens committed himself to the working relationship when he signed a letter-of-intent to play for the Panthers.
“I never really knew much about Ohio Dominican, but as soon as I stepped on the campus I loved it. The coaches have a lot of energy,” said Stephens. “It’s a small school, but it’s near Columbus so you’re close to a big city.”
Stephens opted for ODU amid offers from Urbana, Georgetown (Ky.) and Akron. He said Akron wanted him as a walk-on long-snapper and, if he made the team, he would be placed on scholarship his sophomore year.
Ohio Dominican gave Stephens a full-paid offer.
The Panthers plan to use Stephens as a mix between tight end, fullback and receiver.
“I always liked defense. I gave up defense for a chance to play. They want to use me as a hybrid between fullback and receiver. If I can prove myself they’ll throw the ball to me. If not, I’ll just be a blocker,” said Stephens.
“They would like to red-shirt me. I think if I get up to 230 pounds I can compete for a spot.”
Stephens has proven he can catch the football. Playing in Ironton’s run-oriented offense last season, he led the Fighting Tigers with 16 receptions for 240 yards and three touchdowns.
Stephens is also valuable because of his outstanding long-snapping skills.
“It’s pretty important. I went to camps at Ohio State and Cincinnati and they taught me the fine skills of long-snapping,” said Stephens.
Todd Goebbel, offensive coordinator and assistant head coach, recruited Stephens and said the ODU staff felt Stephens was a major catch in their latest recruiting class.
“We are so excited to have Aaron become a Panther. He is a tremendous young man on and off the field with a great family,” said Goebbel.
“With limited scholarships we are always looking for top-flight players that have great value. He is a young man that will play multiple positions for us. He is a talented long snapper, as well as a fullback/tight end. Aaron is the type of player you can continue to build a successful program with.”
A two-year starter at Ironton, Stephens helped Ironton to a 14-9 record, two playoff appearances and two berths in the regional semifinals.
“The thing I remember most about Ironton is the hard work we put in as a team,” said Stephens. “Everyone said we weren’t going to be very good (last season). We came together as a team and won five straight and before we had a bunch of injuries and we still made the playoffs.”
The Panthers are members of the Great Lakes Intercollegiate Athletic Conference. They were 8-3 last season including 7-3 in the league.
Stephens’ talents aren’t an accident. His father Clark was an outstanding football player in high school. The elder Stephens was invited to play in the Kentucky-Tennessee All-Star Game.