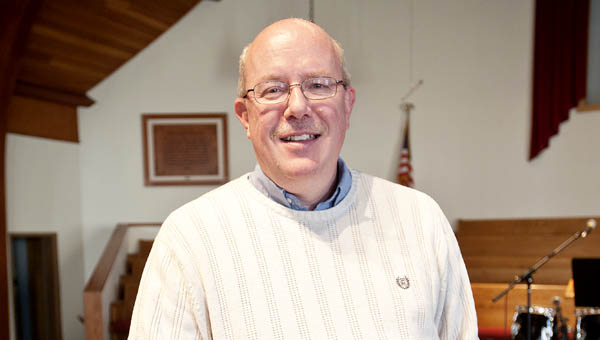 After 20 years of service in the Ironton community, Pastor Dennis Strawn of the Ironton First Baptist Church will be leaving for Mattoon, Ill.

The congregation of First Baptist Church in Ironton has looked to the front of its church as sermon after sermon was given by a man who has helped lead them for more than 20 years. But change is coming and their longtime pastor will be moving on to spread the Gospel to another group of parishioners.

Dennis Strawn grew up near Columbus before going to Illinois to pursue his formal religious education. He said it was a happy twist of faith that brought him back to Ohio to spread the word.

“I set up a meeting to meet with the executive minister of Ohio since I was in Ohio and visiting my parents anyway,” Strawn said. “When I went there the pastor who was pastoring this church also had a meeting at that office on the same day. When he saw me he asked, ‘What are you doing here?’ I knew him because he had pastored my home church before I had ever gone there. But he had come back for homecomings and things like that.”

Knowing the pastor helped him feel comfortable, Strawn said. He told the pastor about his coming graduation and his search for a position. He went on to ask the pastor how he would go about his career if he could start over and received the advice that brought him to Ironton.

“He said he would start as an associate so he could learn under somebody before becoming a pastor of a church,” Strawn said. “I kept hearing that and thought it to be wise council, so I told myself that’s what I’d pursue.”

Strawn said the pastor went on to ask him a lot of questions after that, including what type of associate he wanted to be. Strawn said he would not be happy being pigeon-holed into one thing, that he wanted to preach, do community projects and almost any other aspect of the church he could do.

And that’s when the pastor said he knew exactly where Strawn could go — Ironton First Baptist.

“He told me, ‘that’s exactly what we are looking for,’” Strawn said. “And so he had the search committee contact me and we went through the proper process. Before that, he told me he was praying to God on the way to his meeting and he knew he would find someone while there.”

That man not only found his associate, but someone who would dedicate 23 years of his life to the Ironton church and lead it for 16 years as its pastor. During that time Strawn has done many things to help spread the church’s influence in the community. Strawn said he is the most proud of the various youth programs he has initiated throughout the years.

“I’m very pleased that I was able to start our after-school ministry, The Adventure Club,” Strawn said. “When I first came here I saw we were just adjacent to the public library. On occasion, I would go over to the library and notice there were all these kids there. I asked the staff and they explained most of them were latchkey kids.

“At the time one of the elementary schools was just a block away and the kids would just walk over there after school and wait for their parents to pick them up. I thought, ‘there is a need.’ I talked to the deacons. I went to Dayton Christian Center to see how they ran their after-school ministry. Long story short, we started our own after-school ministry and it is still going today.”

Strawn’s commitment to youth went above and beyond when the local middle school was undergoing renovations. The sixth grade operated out of the educational wing of the church for three years. He said it was important to show the community the church was there to serve in any way it could. He also said, while the church allowed the school the use of its building, that was it. There was no preaching, and the church officials stayed separate from the students and teachers during school hours.

Strawn said he received many offers over the years to leave Ironton and preach elsewhere. He said, until this last opportunity in Mattoon, Ill. came, it just never felt right.

“Staying here this long you get to know the town, the town gets to know me,” Strawn said. “You are just called upon to do things you probably wouldn’t if you haven’t been somewhere very long. But this time I really felt called to this church. I wasn’t actively looking, but when this church contacted me it just seemed like the right match. The more time we spent getting to know the search committee it was obvious God was just calling us to this place at this time.”

Strawn said he has been more than just a pastor of a church, but a pastor of a community, and the ties he has made here have made his leaving bittersweet. But the calling is not logical, God truly works in mysterious ways, he said.

While Strawn said he will dearly miss the friends his family has made in the community, he takes comfort in the fact that today’s technology makes it easy to keep in touch no matter the distance.