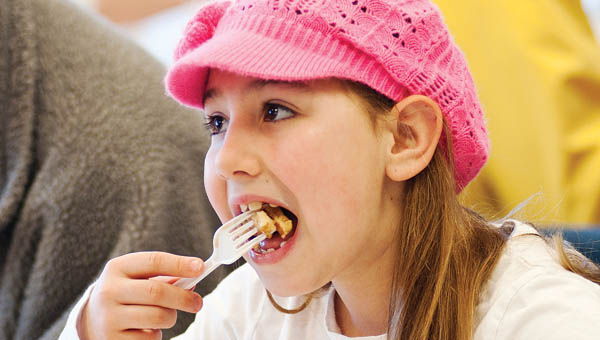 Anyone walking down South Third Street Saturday morning knew this was no ordinary day.

With the aroma of sizzling sausage floating in the air, everyone in the vicinity knew this was Rotary Club Pancake Breakfast Day.

From 7 a.m. until noon three chefs turned pancake batter into breakfast treats. On the far inside was Jay Zornes. Ray “Doc” Payne ruled over his traditional spot at the middle grill, intently watching the bubbles in the batter to know when it was it was time to flip the pancake over.

And the outside grill was manned by Darwin Haynes, who goes at pancake making in a methodical, scientific way.

“It is one and a half minutes on each side,” Haynes said as he started the countdown on his wristwatch.

“I will serve no pancake before it’s time,” he said.

Looking over the crowd filling all the tables at the former AEP building, he said he was surprised and pleased at the turnout.

“Usually we get the best crowds on cold, bad days,” he said. “But on good days people want to work on home projects or go to the mall.”

But not this Saturday as pancake enthusiasts came at a steady pace from about an hour after opening through the morning.

“It is like a tradition in Ironton,” Marita Stanley said. “And it goes for a good cause.”

Saturday was a family affair for Mary Wilcoxen, who has come to the breakfast for the past 25 years. Wilcoxen was there with her daughter, Rayetta Waldo, granddaughters, Haley Waldo and Taylor Parnell, and great-grandchildren, Tara Parnell and Mason Parnell.

“This is like the Memorial Day Parade,” Wilcoxen said. “You get to see people here you only get to see once a year.”

Rayetta Waldo continued her tradition of helping Payne celebrate his birthday by presenting him with his own individual pink-iced birthday cake, inscribed “Happy Birthday, RayDoc.”

Payne, who has been at the griddle for the past 41 years, will turn 83 on Tuesday.

As community leaders including Dr. Bill Dingus, Joe Jenkins, Scott Evans and Rod Depriest acted as servers making sure all diners had enough coffee and milk, Boy Scouts from Troop 103 from Deering kept up their own tradition of bussing tables to earn service project badges.

There to support their fellow Scouts were members of the Ironton Troop 106 who showed up 12 Scouts and seven leaders strong.

For Dianne Clement, a Rotarian member at a fellow club in the Tri-State, the reason for coming out on a Saturday morning was simple.

ROME TOWNSHIP — The proposed senior housing project in the eastern end got a possible $50,000 boost from the Lawrence... read more