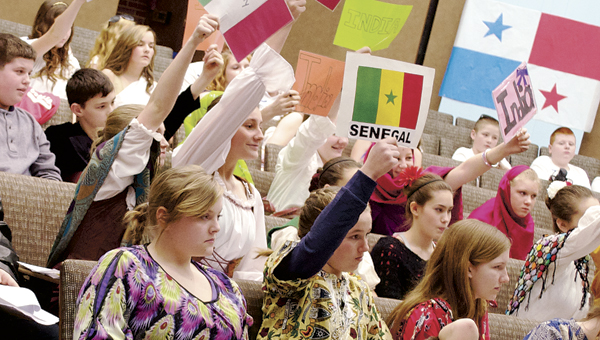 Delegates raise their flags to show their stance on a presented resolution or ask a question of the presenting nation during the Lawrence County Model UN Friday in Ohio University Southern’s Bowman Auditorium.

It is not every day a group of middle school students dressed like Crocodile Dundee, geishas and Rastafarians come together to debate issues, but then it is not every day they participate in a Model United Nations.

Gifted and Talented students from Chesapeake, Fairland, Rock Hill and Symmes Valley Middle Schools dressed up and portrayed themselves as delegates from various nations from around the world Friday at Ohio University Southern’s Bowman Auditorium in Ironton.

“The point of this is to have the students research different countries and learn about their cultures,” Terry Montgomery, Chesapeake Middle School TAG teacher, said “They try to represent that country in regards to how they would vote. After their research, they learn about these countries’ problems and they then create these resolutions as solutions to real world problems. It is amazing really.”

The resolutions brought forth before the delegates ranged from Australia’s asking for a postponement of a small arms treaty vote to Syria’s plea for help to end their civil war.

The delegates took their turns going before the assembly to argue for their resolution. The assembly then asked questions and either argued for or against the resolution. After closing remarks by the presenting nation, votes were given.

There was a lot of laughter as the students had fun with what they were doing, but the resolutions were serious, such as Italy’s request for a limit of arms purchasing due to its affects on developing countries.

“We already have enough weapons to blow up the world five times, when once is enough,” Darby McCloud, Chesapeake Middle School eighth grader and delegate from Italy, said. “Instead of weapons, we would like for nations to buy food and other necessities.”

All of the resolutions followed the same lines as Italy’s, focusing on current world problems such as war, starvation and austerity.

Jalileh Garcia, Chesapeake Middle School eighth grader and delegate from Spain, said she enjoys Model UN because it gives her and her fellow TAG students a reason to research things happening around the world.

“I think it’s really fun because you get to see world issues,” Garcia said. “Sometimes your school doesn’t teach you the current news, and instead you go over things that happened in the past. Here we have an opportunity to learn about what’s happening now.”

The Model UN was made of seventh through eighth grade TAG students, but the sixth graders were not left out. To allow them the opportunity to test the waters, they created fake countries and resolutions to present to the assembly.

The process of presenting and voting was the same, but the resolutions from Havastan, who had too many people named “Stan;” Japancakes, who suffered from dry pancakes and no maple syrup; the Democratic Republic of Potamia, who called for slinging drug lords into the Bermuda Triangle by using a giant trebuchet; and Salti Arabia, who asked for other nations to purchase their salt and save them from salt avalanches, were given with less than straight faces.

India, Panama and Greece received awards for presenting the best resolution; while Italy, Russia and Japan took in awards for best representing their countries through dress and flag design.

COAL GROVE — The Lawrence County Board of Developmental Disabilities is gearing up for the 2013 DD Awareness Month... read more