What’s next for once grand landmark? 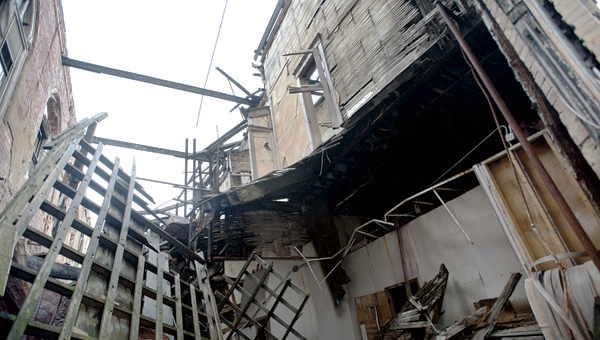 The 120-year-old Memorial Hall may have been cemented in the National Register of Historic Places, but its fate as a landmark in Ironton is not so certain.
To keep Memorial Hall or not to keep it — that was the topic of discussion at Thursday’s Ironton finance committee meeting.
Since the Lawrence County Commission gave up the possibility of restoring the site last fall, the responsibly of the structure’s future fell back at the feet of the City of Ironton, which owns the site on a corner lot at Fourth and Railroad streets.
Mayor Rich Blankenship presented the committee with some quotes from the city’s contracted engineering firm, E.L. Robinson Engineering, on the cost to begin removing the interior of Memorial Hall and stabilizing the walls.
The cost to clear out the interior, removing the wood, plaster and other debris, would cost about $100,000.
Patrick Leighty, the engineering firm’s Ironton office manager, said the debris would have to be removed with a crane.
Another approximate $56,000 for steel framework would add to the cost, Leighty said, to support the exterior brick walls.
“Those walls are 50 feet tall on the inside,” Leighty said. “And with the building codes, since they are so tall, you have to brace up the brick on the inside. … Once we removed all the debris there is nothing there to support the brick from bowing in.”
“That’s not anywhere near a finished product?” committee member Kevin Waldo asked Leighty.
“No, nowhere close,” Leighty said. “Absolutely not. There is lots of work.”
Waldo also asked Leighty if the structure had suffered any additional deterioration since he last inspected the building in 2011.
“It has caved in more,” Leighty said. “Whenever we did that (inspection) originally, there were still a couple of trusses that were up. There are no trusses and more things have fallen down into the basement.”
“If you look inside of it now, about half of it is down,” Blankenship said. “When we took the roof off, we did put steel beams up. So they are still there.”
The current state of Memorial Hall sparked a debate on how to proceed with the structure. Committee members agreed that restoration was not an option due to finances, but even the $156,000 project to gut the interior left the committee wondering where that money would come from.
“What is the cost just to look at the other end?” committee member Aaron Bollinger asked. “What’s the cost for full demolition?”
Leighty said demolition could cost between $250,000 and $300,000, but also said other companies may be interested in the historic stone of the structure.
“There are a lot of companies that would really be envious of that stone,” Leighty said. “You don’t know how hard they would sharpen their pencils, but I would say there are some New York companies, New England companies, there are people who would come a pretty far way.”
Bollinger said he was in favor of researching if there were companies that would bid on the demolition job for a chance at the stonework.
“We could really minimize the demolition cost because of bidding this out to those who want these products,” Bollinger said.
Committee member Mike Lutz reminded the group that Shawn Walker, of Ashland-based Walker and Associates, had drawn up plans to demolish the structure but leave the stone and create a green space and veterans memorial.
“I think we need to tear it down, but I liked Shawn Walker’s proposal if it is feasible,” Lutz later said. “I don’t think the building is salvageable to any kind of use.”
Lutz also said he was in favor of selling some of the stone if that meant cutting the cost of demolition.
“I think, procedurally, we need to establish this is our goal. This is what we want to accomplish,” Waldo said. “It seems like every time we talk about Memorial Hall, we start going on off all these tangents and worrying about things and we lose sight of the eventual goal, to get that place, one, safe. I think everyday, there is a chance of it coming down.
“… If we can’t get the money, let’s figure out a way to get that property to somebody that can do something with it. Five and a half years now I’ve been on council and that building has been down there, literally, falling apart.”
Waldo said council needs to decide, as a group, if Memorial Hall should be torn down completely, restored or partially kept for a park and then put bids out.
“I agree with what you’re saying Kevin. We don’t want to get off on a tangent,” Bollinger said. “I think it could become a simpler question of, we make this decision. Do we want to keep it, or do we want to look into demolishing it. I think that’s the answer. Keep it or not keep it.”
Blankenship said he would research the options and have the information to present to the finance committee next month.
“I don’t want to leave this office and that building still be like that,” he said.
¬¬

PROCTORVILLE — Bob Walters looked over at the stately white two-story house on the river side of Elizabeth Street... read more