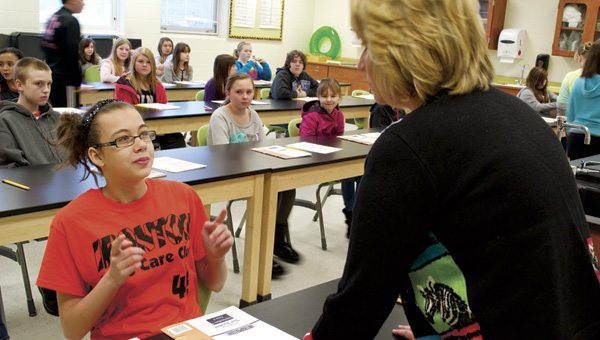 Students deal with taking tests in different ways. Some bite their nails, chew on pencils or stare blankly into space; while some walk around, joke and laugh with their friends or just sit there with a confident expression like they know they have it.

The 32 sixth grade students waiting to take the Child Welfare Club’s Eddy Test at Ironton Middle School on Wednesday represented all of those.

To qualify for the test, students at Ironton Middle School must score in the top 25 percent on the fifth grade Ohio Achievement Test. St. Lawrence students, the composite scores from any nationally recognized standardized test that measures scores in core subjects are used to determine eligibility.

The majority of students were from Ironton Middle, which gave them home court advantage. Lauren Bush, St. Lawrence student, said being in a new classroom, surrounded by people she didn’t know took some getting used to.

“I knew a lot of the people who are taking the test with me, but not everyone,” Bush said. “But it is overwhelming for so many kids to be in the same classroom because we have a lot less kids at St. Lawrence. I think it affected me in the beginning because I didn’t know everyone, but we took a 10-minute break so I got the chance to actually talk to the people around me and get used to them.”

Getting familiar with her surroundings was only part of reducing the difficulties of taking the test, Bush said. She commented that the math section was easy for her, but that time caught up with her.

“In the beginning I thought it was going to be easy, but the hardest part has been reading comprehension,” Bush said. “We have to work so fast because we only have a small amount of time. The things we have to read are so long that I don’t really have the time to think about how to comprehend it.

“But this test is good experience because all our major tests will be timed in the future, and we will have to finish it in that time.”

Bush added the test is a good experience because some students may not be challenged in their normal classes, and the Eddy Test gives them a chance to try something harder and see what they need to study.

Kylie Deer, Ironton Middle School student, agreed with Bush, but said she found the math to be difficult without the use of a calculator.

“It was good though, because it actually made you think,” Deer said. “There are things in class that I can finish in five minutes, and then there’s nothing else to do. But this is harder and takes longer to do.”

Top scorers of the Eddy Test participants will receive an Eddy Award and will be honored at the Child Welfare Club’s scholastic banquet later this year.

Lawyers negotiating who gets vehicles