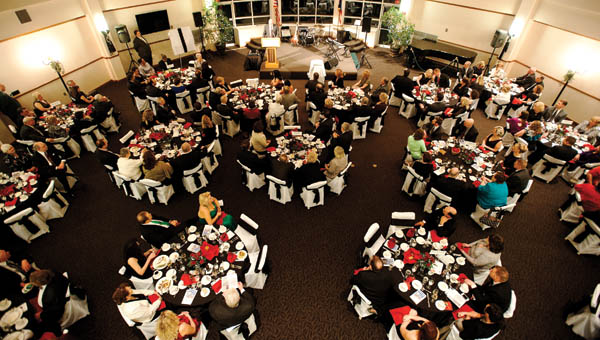 Praising its past while they looked to an even brighter future was the message Ohio University officials brought to dinner guests at the Dean’s Gala at OU Southern.

The inaugural event was touted as a way to honor the 10th anniversary of OUS’ nursing program. But guests at the campus’ Main Rotunda heard a litany of accomplishments that OU has already brought to the state and Lawrence County.

Calling on the slogan of the capital campaign of the university as a whole, “The Promise Lives,” OU President Dr. Roderick J. McDavis said, “ The promise can be seen in (the OUS) associate degree nursing program. We provide an opportunity for an education for those who might not be able to obtain an education.”

Since its inception, the OUS nursing program has had 395 students with 90 percent of them passing their state licensing boards.

McDavis, the university’s 20th president, said OU is one university with six campuses — the main university and five satellites.

“The founders of Ohio University in 1804 would have never imagined what our university has become,” he said.

The university has received the GI military friendly designation.

“We have extended a hand to men and women in the military,” he said. “They find an easier path to be admitted (to college).”

The university has a national ranking and its students have received 84 national and international awards.

“Our students can compete with the best,” the president said.

To date, The Promise Lives campaign has reached 96 percent of its goal of $450 million more than two years ahead of its target date of 2015.

Now officials have set a new goal of $500 million.

“We want to raise more money to help more students get an education,” McDavis said.

Preceding McDavis’ remarks, OUS dean Bill Willan outlined innovatiaons at the campus from a new bachelor of science in applied management degree to infrastructure improvements to a botany outreach center in the county.

Throughout the cocktail hour guests bid on silent auction items including a trip to Washington, D.C. and sports memorabilia autographed by Peyton Manning, Brett Favre and Muhammed Ali.

Music was provided by Laura Evans and Company.

“This is a beautiful evening honoring the 10 years of OUS nursing program that has produced nurses for all of the medical facilities in the area,” Sharon Shaw of St. Mary’s marketing department, said. “They keep the area afloat.”

Gas prices down to start week