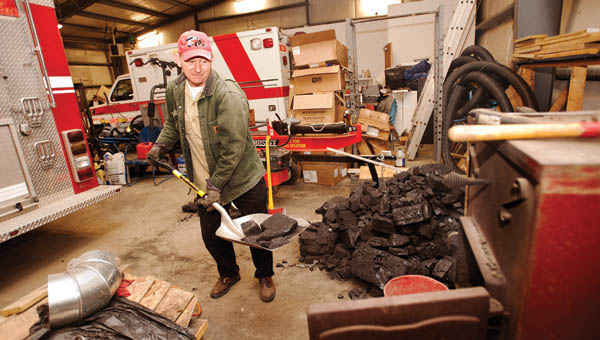 Decatur shows a lot can be accomplished with very little

On Dec. 5, 2012, a 14-year-old Ironton teen walked away from her home at the Lawrence Street Apartments, prompting an urgent search and rescue mission from multiple law enforcement and emergency response agencies in Lawrence County.

Amber Farmer left home with little more than her Shih Tzu dog, Tobey, and a small Hello Kitty backpack. Her parents reported her missing at about 4 p.m. that day, but by the time the sun went down, the search efforts turned up unsuccessful.

Helicopters from the Ohio State Highway Patrol couldn’t find her.

Bloodhounds from the Huntington, W.Va., Police Department couldn’t find her.

It was a member of an underdog volunteer fire department that found Amber, showing all of Lawrence County that big budgets can’t replace training and dedication.

The temperature that night dipped below freezing and the search resumed at about 7:30 a.m., this time with two new members of the search team: Don Henry, Decatur Township Volunteer Firefighter, and his Weimaraner, Shadow.

By 9 a.m., Henry and Shadow were searching the wooded hillside near where Amber had been last seen with her dog.

Henry used Amber’s pillow and one of her shoes to give Shadow the scent.

The 3-year-old dog had been trained by Henry for the past two years, first using hot dogs as training aids, then more difficult items.

That day, Shadow’s training paid off in a big way.

“I think (Shadow) smelled her dog, because he marked the scent,” Henry recalled. “Then he went straight up the hillside. We went probably 700 to 800 feet, went straight up a hill another 300 feet. There was no dog barking and (Amber) wasn’t talking. And right there she sat.”

Once Shadow’s job was done, Henry’s training as a first responder kicked in.

“I walked around her and I said, ‘Amber?’” Henry said. “And she goes, ‘Yeah?’ It wasn’t loud and she was so croupy that she couldn’t speak. … Once I found out she was alive and there was no foul play, I was excited that I found her. I was real excited, especially because they had been out there all night. It was emotional.”

Organized in 1982, the Decatur Township Volunteer Fire Department is the lowest-funded department in the county.

Thanks to a tax levy passed during that year, the department of 12 members (plus Shadow) gets about $1,952 a year to run the entire operation. Otherwise, the department’s only source of funding is from grants and community support.

“That’s quite a few runs for a little department like ours,” said Gene Cox, fire chief. “We have been up as high as 100 runs a year. Any help we get is greatly appreciated.”

Cox joined the department in 2005 and became chief in 2007. Since then, Cox said he has worked to make ends meet with what little money comes into the department, working to replace aging equipment and keep members up-to-date on necessary training.

“I feel we are very, very blessed to have what we have,” Cox said.

There were times early on in his firefighting career that the department’s equipment wasn’t quite up to snuff.

“One of the first fires I went on here, on one of the old trucks, the line I put water to, the metal piping, it was old and rusted out, it actually blew in two,” Cox recalled. “So we had to unhook the hose and go to another line, which took several minutes.”

The Decatur Township Trustees applied for a FEMA grant of more than $200,000 and helped meet the 5 percent match requirement. The fire department scraped together about $2,000 to add to the township’s contribution of $12,500.

And it just seemed like whenever there was a need for equipment, luck was on the fire department’s side.

Last year, Cox applied for grant from the Ohio State Fire Marshal’s Office and was awarded more than $24,000 for new equipment.

With that money, Cox replaced radio equipment and purchased a heavy lift airbag system. And the new buys were anything but arbitrary purchases.

“Two summers ago a guy got pinned under a tractor up the road here and we didn’t have any way of lifting it off of him,” Cox said. “We asked for mutual aid from Coal Grove because I knew they had the airbag system.”

Now, if faced with a similar scenario, the department could lift a piece of heavy equipment at least 26 inches off the ground with the airbags and their backpack air bottles.

The department has also been fortunate to receive equipment from the Ohio Department of Natural Resources through its federal surplus loan program.

What used to haul jet fuel, the Decatur Township VFD now uses to haul 5,000 gallons of water. ODNR still owns the equipment, but the fire department can use it for as long as it is needed.

Through the same program, the department also got a brush truck used to fight off-road brush fires and aid in rescues. The vehicle also tows the department’s ATV and rescue basket. The ATV was purchased with grant money.

What wasn’t bought with grant money or loaned from the federal government came from donations and ingenuity.

Last September a boot drive brought in about $800, which was used to replace batteries in the tanker truck and emergency response vehicle, as well as a defibrillator.

Turnout gear for the firefighters had been donated as well as purchased through a FEMA grant.

Cox said the only way they could raise the 5 percent match for the grant was thanks to some good fortune.

“We got lucky,” Cox said. “They closed this old school up the road here and the guy who bought it didn’t want the playground equipment. So we made a deal to take that equipment down and we took it and sold it to a church in northern Ohio.”

The department’s rescue truck was donated to them by the Coal Grove VFD. There was an issue with the starter, Cox said, which he fixed himself.

The Ironton Moose Lodge donated a trailer, which hooks to the back of the ATV for rescues.

Hecla Water provides their service free of charge to the department.

“That is great because if you have to go to a pond to fill your truck and get dirty water, it saves a lot of damage on the equipment,” Cox said.

For other equipment, like the Jaws of Life and thermal imaging camera, searching for the best deals is something to Cox has become quite accustomed.

Looking to the future

This year, Cox is putting together a list of equipment for another fire marshal’s grant, should the department be approved.

One piece of equipment that Cox has been pushing for is an airboat. In May 2010, heavy rains caused flash flooding all over the county and brought high waters into the fire station.

“We had one call for a water rescue where a man was on top of his vehicle floating away,” Cox recalled. “I had water come over the hood of the truck. The headlights were under water.”

Cox said airboats skim the surface of the water and float over top of unseen debris, whereas other boats run the risk of getting debris caught in the motor, with the possibility of another person being stranded in rushing water.

Training is another area Cox said he would like to improve on. In addition to the yearly countywide fire school, training in the fire station would be ideal.

“Long term, I’d like to be able to get more training for our people,” Cox said. “We don’t have the resources to do in-house training the way I’d like to. I’m working on changing that with this current grant to try to get some projectors to do video training in-house. Hopefully, if we get the grant, we can have a weekly session.”

Henry also said he is working with more of his dogs to train them like Shadow. Ideally, Henry said he would like to have three rescue dogs ready to help if needed.

“Shadow is the No. 1 right now,” Henry said. “He can find anything if you have a sample of it.”

On the way to becoming an expert rescuer is Henry’s other Weimaraner, Sophie.

Sophie recently weaned a litter of pups and Henry kept one to train as well.

“I kept the best of the litter out of this one,” Henry said.

Henry said he hopes to also have three handlers trained to take the dogs out if there is an emergency.

Everything the department has, Cox said, is ready to aid any part of the county, or even the state, if needed.

“Everything we’ve got here helps us, but at any given time it could be moved to any other part of this county,” he said. “If Ironton needs that, we go. If Upper, Coal Grove need it, we go. We’ve actually been to South Point three different times on things that they’ve had, search and rescue, brush fires. We have supplied water for Ironton. … All the departments work extra well together.”