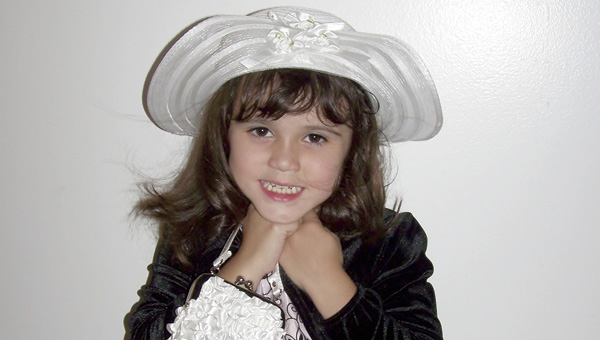 When Barbie Bias is asked to describe her only daughter, Annaliese Grace, she smiles. That alone is no small task.

Less than a year and a half ago, her energetic and bubbly second-grader’s life tragically ended. The journey Barbie has taken since then is one intrinsically woven with faith.

At just 7 years old, Annaliese was a loving and caring little girl with brown hair and big brown eyes. “She was so full of life,” Barbie said. “She loved to make people giggle. When she was with you, she was so focused on you and what would make you smile.”

Barbie said Annaliese seemed to want everyone she was with to know how special they were.

“She got into her fair share of mischief, but she did it with a smile and a laugh that just lit up the room,” Barbie said. “She was baptized just two months before she went to Heaven. She was a very special little girl.”

Barbie, Annaliese, and Annaliese’s father, Matt Bias, had moved from Huntington, W.Va., to Indiana in 2010, and then to Anderson, Ky. During this time, Barbie and Matt started divorce proceedings. Barbie said Annaliese had told a licensed social worker that Matt was abusive, and the social worker recommended that she spend as little time with him as possible. But this was inadmissible in court due to the social worker being across state lines.

“Nothing was finalized,” Barbie said. “Not even that we were separated.”

Barbie was granted custody on Aug. 15, 2011, and Annaliese was to be returned to Barbie the following day.

But she never saw her daughter alive again.

On Aug. 16, 2011, rather than meeting at the police station to give Annaliese back to Barbie, Matt sent a text wanting her to meet him somewhere else, but Barbie stood firm that they would meet as planned.

While Barbie was at work, she said the police came in with a social worker and spoke to her boss.

“I heard my bosses gasp. I said, ‘What happened? Is my baby OK?’ The social worker shook her head no. They told me she was dead,” Barbie said.

Barbie said everything that happened after that was a blur. She remembers going to the police station. A pastor from her church came in, knelt down in front of her, and said that Matt had shot Annaliese five times, though later they learned it was six, and had shot himself once. They both died at the scene.

The one small comfort Barbie has about what happened is that Annaliese wasn’t awake when she died.

“She went to sleep happy and woke up in Heaven,” Barbie said.

Barbie later found out Matt had quit his job the day before he killed Annaliese and himself, and she believes his plans for wanting to meet her somewhere else that morning had to mean one of two things.

“Either I was meant to watch Anna die or I was supposed to die that day, too,” Barbie said.

Barbie said her faith, knowing that God is good no matter what circumstances we go through, and prayers of other people is what has gotten her through the time since the tragedy.

Barbie said, after Anna’s death, she felt like she lost her purpose.

“I was going downhill,” she said. “It was only by God’s mercy and grace that I could get up in the morning and find happiness again, and take a look at a child’s smile and know my baby girl is smiling in Heaven and that I will see her again.”

Barbie began to see glimpses of a new purpose for her life. She said that each day there is someone else’s life she can touch, by giving a smile, a prayer or helping in some way.

“Our life is more than within our four walls, or our churches,” she said. “Our life extends to every person we see.”

She said seeing God’s blessings and knowing that there are people you can help with a smile, a hug or a gentle word, it can change feelings so negative that make you not want to move and question why you should even get up in the morning.

“I will walk this journey and make someone’s day brighter,” she said.

Barbie began to do just that.

She has spoken at several churches including Tri-State Worship Center in South Point. Barbie said she tells her story not to dwell on what happened but to share how amazing God is.

“The reason we do that is because people are hurting,” she said. “It doesn’t mean that their valleys are any less dramatic than mine. They’re hurting. If I can share God is faithful no matter what we encounter, and if somebody sees that, they can see that God is faithful and can bring good from anything we go through.”

“Just knowing what she had gone through and be able to stand and pray, and, through that, hold on to her faith,” Wagner said. “That faith will see her through.”

Wagner said the way she used the tragedy as a springboard to make a difference was inspiring.

“She didn’t let it defeat her,” he said.

In addition to public speaking, Barbie spends much of her time with Faithful Grace, a pending non-profit organization in Evansville, Ind., that provides support for children who are at-risk academically, socially, emotionally, financially and spiritually.

The children get a meal, clothes and a lesson.

“We help them with their homework. We allow them to develop their leadership skills. We let them start using what they’ve been blessed with to basically help them grow in all areas,” she said.

So far, the organization has been able to serve 35 children. They focus on children ages 9 to 14, but Barbie said they never turn a child away.

There is an active board of seven members for the organization, and they also participate in the lessons. There are workshops quarterly that integrate the family.

“We try to develop great families,” she said.

Some of the workshops include outlining what needs to happen when families face domestic violence. Barbie said the families have been receptive.

“We had a girl last semester who we fed a meal, and she said, ‘I’m hungry, I’m hungry.’ It was the only meal she had to eat that day,” Barbie said. “Without Faithful Grace, she would be slipping through the cracks.”

While she misses Annaliese every day, she is finding purpose again.

“My family may not be set up the same way it was when my baby was here,” Barbie said, “but if me being left behind means it can give them a place where they are safe, happy and learning, and families are coming together to see that God is always faithful no matter what their circumstances are and those kids grow to a faithful relationship with God, that’s what I want to happen.”