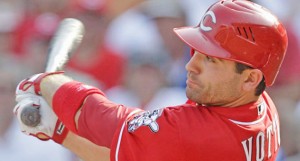 Votto hit a two-run homer, an encouraging sign that he’s progressing in his recovery from knee surgery that robbed him of his power last season, and the Cincinnati Reds beat the split-squad Milwaukee Brewers 5-2 on Monday.

Votto didn’t homer after June 24 last season because of the injury. He missed 48 games after tearing cartilage in his knee, and was reduced to hitting mostly singles when he returned because the knee wasn’t fully healed. When the 2010 NL MVP reported to spring training, he said the knee felt good but wasn’t entirely back to normal.

He knew the significance when he connected in the third inning off Robert Wooten.

“What’s it been, eight months?” a smiling Votto said after leaving the field. “My swing is getting there. I have a ways to go but my knee feels fine.”

Votto also had an RBI groundout off Tyler Thornburg, a third-round draft pick in 2010 who is trying to win a spot in a Brewers rotation that’s in flux because of trades and injuries

Thornburg started last season at Double-A, but wound up making three starts for Milwaukee. On Monday, he gave up two hits and two runs in two innings.

“Last year I was pretty nervous going into spring training, being around all these guys for the first time,” Thornburg said.

Right fielder Jay Bruce was scratched from the Reds’ lineup after batting practice because of a sore right heel.

Armando Galarraga, Sean Marshal and Jonathan Broxton blanked the Brewers on three hits through the first five innings. It was Galarraga’s first appearance since he signed a minor league deal with the Reds earlier this month. The 31-year-old right-hander was 0-4 with a 6.75 ERA in five starts last year with the Houston Astros.

Galarraga lost a perfect game on June 2, 2010, while pitching for Detroit when first base umpire Jim Joyce called Cleveland’s Jason Donald safe on what replays showed should have been the final out of the game. Joyce admitted after the game that his call was incorrect.

Jean Segura, who is expected to start at shortstop for the Brewers in front of veteran Alex Gonzalez, had two hits. Segura was obtained from the Angels in the trade for starter Zack Greinke last season.

NOTES: Shin-Soo Choo has reached base and scored in the first inning in all three of his starts. The Reds had the lowest on-base-percentage for leadoff hitters in the NL last season, one of the reasons they got Choo from the Indians. … Jimmy Nelson, the Brewers’ second pick in the 2010 draft, pitched two scoreless innings.

Frazier works to improve his game