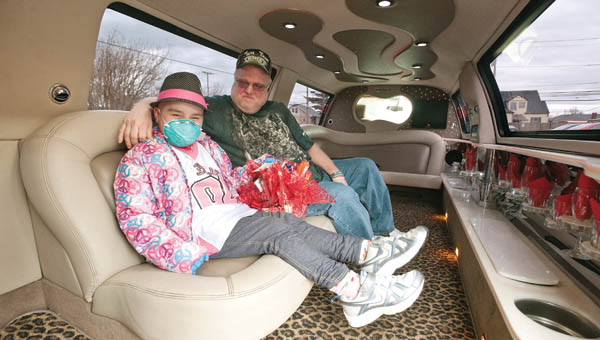 Eight-year-old Megan Foltz, with her father Jimmie, get comfortable in the back of a white stretch limousine from Classy Limousine following her trip back from Cincinnati Children’s Hospital. With the exception of the occasional visit Megan is back home in the Burlington area to stay after her second battle with AML, or acute myeloid leukemia.

BURLINGTON — County Road 1 turned into Megan’s Road Tuesday as fire trucks blared their horns, police cruisers flashed their lights and people dotted the side of the road with signs with the words “Megan Rocks,” welcoming home a young girl who is coming out on the winning side of her second bout with leukemia.

Megan Foltz, an 8-year-old Burlington Elementary School student, was welcomed in style as her limousine pulled into the school’s parking lot where she was greeted by administrators, teachers and students.

Her father, Jimmie Foltz Jr., said he had just found out about the event that morning, and he thought it was amazing to see there really are good people left in the world.

“(The community), did all this,” Foltz said. “Just to see everyone along the roads, with their signs, and everyone here is just amazing. You hear about all the bad people in the news, but this right here shows people can still be good.”

Mylissa Bentley, Burlington Elementary principal, said all it took was one mass text message and that was it. Bentley said once she asked for help it came rolling in.

“I said ‘Megan is coming home, what can we do?’ and that was it,” Bentley said. “We are a loving community here in Burlington and we love Megan. The teachers and parent volunteers were really the driving force here. You can see all the banners and posters and see the people here to know we are glad she is home.”

And Megan said was glad to be home as well. She said there wasn’t anything in particular she was looking forward to doing, she was just happy to do it at home.

Her father said the medication she is on weakens her immune system so she has to wear a face mask and latex gloves. But her bright eyes suggested she was smiling as she looked at everyone and thanked them when they said they were happy to see her.

Megan was originally diagnosed when she was 5. Then the Burlington third grader went into remission for about two years until this summer when the disease reappeared in an advanced stage.

Foltz said, although Megan’s cancer came back after her first remission, he is confident it is gone for good this time. She received a successful bone marrow transplant while at Children’s Hospital in Cincinnati, which he said greatly reduces the chance for the cancer to return. He said Megan will need weekly treatments and will alternate between Children’s Hospital and Cabell Huntington Hospital in Huntington, W.Va.

Bob Leith and Steve Call have taken Ohio University Southern students all around the region to educate them on the... read more