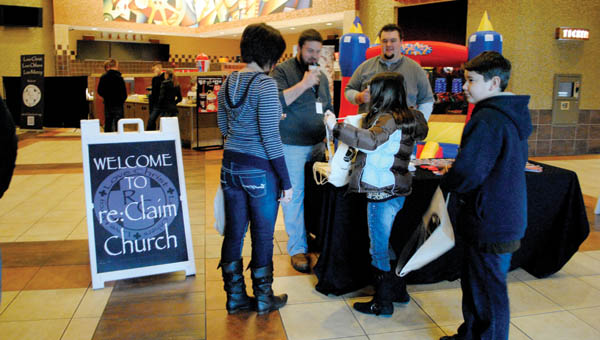 Throughout history, churches have changed, going from cathedrals to simpler buildings with padded pews and stained glass, to school buildings — and even movie theaters. While the buildings of the churches may have changed, their mission remains the same.

Re:Claim church recently began meeting at the Cinemark theater in Barboursville, W.Va., at the Huntington Mall. Their mission is something churches can agree on, regardless of where they meet: to love Christ, love others and love mercy.

Pastor Corey Adkins said the goal of Re:Claim is to influence the community and share the gospel, taking the message to people where they are. People are comfortable going to a movie theater, whereas some with past negative church experiences might shy away from sanctuary doors.

“One guy said, and I don’t want people to take this the wrong way, but he said ‘It doesn’t feel like a church,’” Adkins said. “I know this fellow, and he really had a bad time with church over the years. So he comes here, hears the message of Jesus and worships, and still doesn’t feel like he is excluded.”

Re:Claim volunteer, Alisha Harbour, 19, of Chesapeake, started attending small groups, or house churches, with Re:Claim before the church had settled on a location.

“My old church I went to kind of went downhill,” Harbour said. She is also dating Adkins’ brother-in-law, so she decided to try going to church with him.

Then the plans for transitioning to services at the theater began.

“It’s not the traditional church setting, where you go and sit in a pew for an hour or two — routine,” Harbour said. “It’s different and exciting each Sunday. You don’t know what to expect. But it reaches out. People come to the mall.”

Harbour said when you first get there, it might seem as if you are going to a movie theater, but when it starts, it feels like a church service.

The theater doors open at 9 a.m. on Sunday mornings, with donuts and coffee and time to talk, as well as an inflatable for children. By 9:45, people gather in the theater, as the sounds of the worship band, LIFT Ministries, gears up.

Concert-style lighting illuminates the band, with the words to the modern praise choruses on the projection screen to encourage participation. Cushioned seats with cup holders begin to fill up with the 50 to 60 people who have been coming over the past month. Offering and prayer come next.

The use of technology is abundant, with video clips, excellent sound, and Bible apps on tablets and smart phones making it easier to read in the darkened theater. The message begins and Adkins shares what is on his heart for the week.

In the theater party room, RC Kids has Re:Claim team members teaching a lesson and doing games and crafts with children from 3 years old through the fifth grade, though as attendance progress, the plan is to have a separate preschool class. The nursery, in the theater conference room, is for children from birth to 2 years old. For nursery and RC Kids, children are checked in and checked out with a computerized system to give matching alphanumeric labels to children and their adults.

“We wanted them to have a safety system,” said Brittany Adkins, Corey Adkins’ wife.

She said being in such a public place, it was important to play it safe.

During the message, Corey Adkins said, “We are here, but we’ve just begun.”

Getting to the first few weeks of the new location took a long time and a lot of planning.

The group was originally part of a youth group at First Weslyan Church in Huntington, W.Va. Corey Adkins started asking God what was next, he said that’s where this adventure began.

The church is still backed by the Wesleyan denomination and has been with the Adkins’ each step of the way, from church planting assessment to training, and even to church planting boot camp.

The group had been meeting at a bagel shop in Huntington, at the Hampton Inn, and in several homes for small groups. On a whim, Corey Adkins called Cinemark’s headquarters in Texas to see what they thought about leasing the theater to them for services.

“They were very friendly,” Adkins said. “It has a little bit of a price tag to do this, but nothing compared to church overhead and things like that.”

He said his church prayed about it for a while, and it was about a five-month process to solidify the lease, which they now have for a year.

The set-up for the services proved challenging at first, but now works like clockwork. The volunteers, about 20 of them, show up at 7 a.m., unloading signs, free visitor merchandise, children’s supplies, band equipment, everything, to be ready by 9 a.m. After the service begins, the refreshments and bouncy house, visitors table and signs are moved to another hallway, to empty the lobby area for the theater staff to begin their day. After the service, the volunteers talk to each other and to visitors for 15 minutes, then begin the process of getting everything out the door in time for the theater staff to prepare for their first showing.

“It took months to organize it,” Adkins said. He added that the staff of the theater, along with the general manager, have been extremely courteous, welcoming and helpful.

Adkins sees the benefits and opportunities endless for ministering from the mall.

“Thousands come in and out of here every day,” he said. He added that it is a great outreach opportunity for mall employees who don’t get to go to church all the time, but could go to Re:Claim before work.

He said now that there is a building to invite people to, new and different people are coming.

“It’s exciting,” Brittany Adkins said. “I was skeptical at first, but I’ve seen it go from a dream to a reality.”

“People have seen the vision we have, the community aspect and outreach. It seems like people really grasp it,” Corey Adkins said. “Eventually this will turn into not just a Sunday service, but a church who is on a mission in our community in the area. We just happen to have church in the mall.”

Eight-year-old Megan Foltz, with her father Jimmie, get comfortable in the back of a white stretch limousine from Classy Limousine... read more