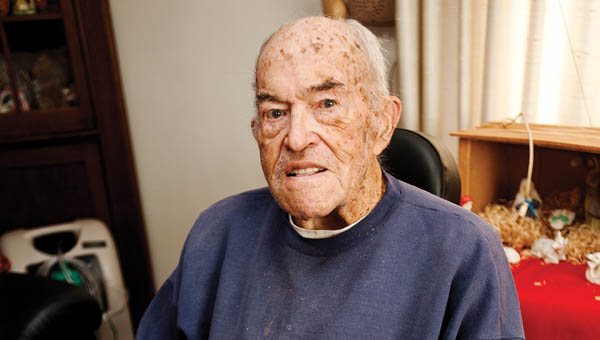 In describing an “unsung hero,” two adjectives come to mind: encouraging and faithful.

These are not qualities that make the headlines but are definitely traits of an unsung hero. Lenville Mays is a 92-year-old gentleman who has been both an encourager and a man of great faith.

For the past several decades, as long as any of his friends can remember, Lenville has been a faithful encourager to the boys and girls in the Fairland Local School District.

He is the father of four sons and fell in love with basketball when his sons excelled in the sport. His sons are now up in years; however, Mr. Mays has continued to attend nearly all of the Fairland High School sporting events, particularly basketball. If he is not present the students notice and inquire about him. They don’t ask about him because they miss hearing him yell from the stands; because Lenville is unable to yell.

In fact, he can barely speak above a whisper.

For over half his life, Lenville has had to talk with the aid of a hole in his windpipe. He was just a young man when he contracted cancer and had most of his voice box removed.

Mr. Mays has never viewed his physical impairment as any sort of a disability. This has not deterred him from being faithful to his church and from being an encourager to the youth of the Rome-Proctorville community. He has been a quiet, faithful encourager for many, many years.

He is truly an “unsung hero.”