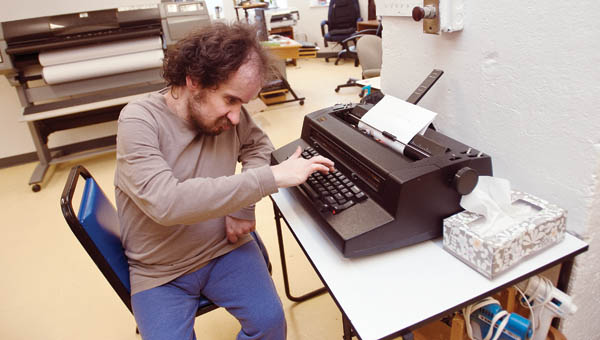 Justin McCreery spends the later part of Tuesday morning typing his name and those of his classmates while attending the adult activity center.

BURLINGTON — Up and running for only a couple of days, the new adult activity center at Sybene was open to guests Tuesday at an open house showcasing the additions in programs to the Board of Developmental Disabilities programs.

Once the headquarters of the Sybene Senior Center the location will offer training in activity and habilitation skills for clients of the DD programs including those at Tri-State Industries.

The new center, which right now has five clients, offers activities that can supplement the skills used by DD clients at Tri-State Industries where the day is geared to work assignments.

The goal is to have by June a census of approximately 60 clients a day at the center who may split their week between working at Tri-State and the Sybene center.

Until July 2012 Sybene had served the eastern end of the county as a senior center until the Ironton-Lawrence County Community Action Organization shut it down following cuts in federal and state aid to senior programs. The center had provided a daily lunch for seniors in that part of the county.

CAO director D.R. Gossett said he would like to see the DD facility grow to where that service could be provided again.

The Board of DD and the CAO have partnered before when they started the Transit Café in the new transit center on South Second Street where DD clients wait tables, make sandwiches and deliver meals.

Eight-year-old Megan Foltz, with her father Jimmie, get comfortable in the back of a white stretch limousine from Classy Limousine... read more