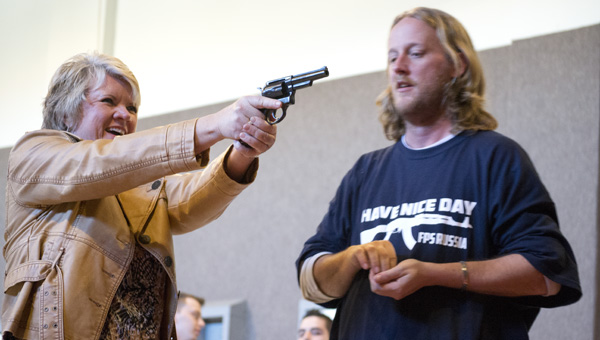 What does a recent high school graduate, a middle-aged teacher and a retired senior citizen have in common?

A fresh desire to carry a personal firearm.

Following the tragedy at Newtown, Conn., gun sellers have seen a rise in purchases as people have surged to their shops in an effort to gain what they see as protection against something so terrible happening to them and those they love.

Allen Wheeler, a South Point native who now owns a firearms store in Cincinnati, said business over the past two years have been steady, but now people are “buying them like crazy.”

“I’ve taught three classes in Lawrence County since December,” Wheeler said. “Two of those have been just for teachers. I personally believe in armed teachers. It’s not perfect. It’s not what we want but it’s what it is. I think it’s sad we’ve come to that, but we have. Not only for kids who come to school with the intent to shoot, but teachers should also be prepared for something as innocent as Little Johnny, not trying to hurt anybody, bringing his daddy’s gun to class for show and tell. Teachers should at least be familiar enough with a weapon to safely take it, unload it and store it until it can be removed from the school.”

With an average of 30 students per class, Wheeler said has taught around 100 students gun safety following the Newtown shooting. He teaches the National Rifle Association Basic Pistol Class, but done in a way which also covers the Ohio Concealed Carry Class, Wheeler said.

The class involves 10 hours of classroom training covering a variety of topics that include pistol familiarization, proper shooting techniques, gun maintenance and troubleshooting. The classroom training is followed with two hours of hands-on training at a gun range.

“This is a gun safety class, not a self-defense class,” Wheeler said. “I don’t have people doing force-on-force or anything like that. They need to show me they can use a gun responsibly. What the NRA and Ohio law preaches is they need to demonstrate the knowledge, skills and attitude necessary to own and operate a firearm safely. That’s what it’s all about.”

Wheeler’s classes have had participants ranging from a first-time gun user to a veteran shooter. Marcinda Mers, class participant from Chesapeake, said she has shot guns her entire life, but as the news is more and more saturated with stories involving guns being used to harm people, she thought it was time to take the class needed to get her concealed carry permit.

“It’s for protection,” Mers said. “It’s something I’ve wanted to do for a long time. I travel a lot by myself and it’s a good idea to be able to carry a gun legally. I had a reference from a friend who attended this class. They said it was a good class, a well-rounded class that didn’t cut corners. I’ve been shooting so long I wasn’t expecting to learn a lot of new things, but he verbalized things that if you’ve been shooting all your life you never really thought about, but now you know why. Gun safety was really focused on, and that is the main reason I’d recommend this class to anyone. It doesn’t matter how long you’ve been shooting, if you intend to carry, a good safety course is important for everybody.”

Wheeler said he feels it is important for people to be able to carry guns, so long as they do so responsibly. He said it is a sad fact, but the world has changed since he was a child and you cannot trust people as you once could.

“The problem is, there is no gun law they make that is going to stop crazy,” Wheeler said. “You can’t legislate against that. Criminals don’t follow laws, they just aren’t going to. We have a responsibility to take care of ourselves and our kids and it might come down to someone carrying a gun to protect them. A lot of people want to personify a gun by saying it’s evil, but it’s not. It’s plastic and metal.”

Wheeler said he continues traveling back and forth between Cincinnati and Lawrence County to teach gun safety classes because there is nothing more important than gun owners knowing how to properly maintain and use their weapons.

The Second Amendment advocate said he takes pride in knowing he helps good people, who want to legally use their guns as “peacemakers,” who will hopefully give the world a better view of guns.

As work continues on the project to build a new span across the Ohio River, the Ohio Department of Transportation... read more