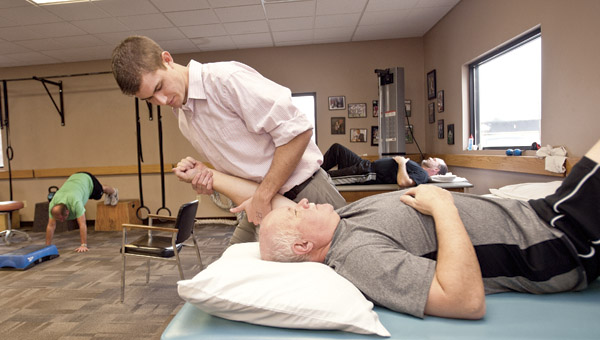 Business growth has been enjoyable journey for Ironton man

Paul McCartney didn’t have Joe Isaac in mind when he wrote “The Long And Winding Road,” but it has certainly been that type of a journey for the Ironton physical therapist.

The road began innocently while he was a high school football player. An offensive guard and All-Ohio linebacker for the St. Joseph Flyers, Isaac sustained a shoulder injury and had to undergo treatment.

“That sparked my interest in the profession,” Isaac said of the first step on his journey. “I didn’t realize there were specialized services like that.”

The natural progression for Isaac was attending college and obtaining a degree in physical therapy. He did some volunteer work initially at college and hospitals in the Ironton area.

“After working in the field, I knew this is what I wanted to do,” Isaac said.

After obtaining his degree from Ohio State in 1994, Isaac took a job at a local hospital. But the road he was on was merely a back road for him. He wanted to make his way to the open highway and travel in a different direction.

“In the back of my mind, I wanted to open up my own practice. I wanted to go into business for myself,” Isaac said.

Most of the patients Isaac was treating were from the Ironton area. Since there was no physical therapy facility in Ironton, Isaac got with a co-worker and friend, Paul Castle, and the pair decided to move toward establishing their own business “since there was a need and it was home.”

First, the duo took a job with a home health care firm. Isaac said they took any assignment, no matter how far away and regardless of the number of patients in the area.

They were quite literally traveling a long and winding road of their own.

“We told them we would go wherever you want us to go,” said Isaac with a grin. “We went to Williamson (W.Va.), Fort Gay (W.Va.), Inez (Ky.) to see one patient. There were times we lost money on the visit. But we picked up enough home health to start our first office on Park Avenue.”

Ironton Physical Therapy opened with basic nautilus equipment and limited parking. Because of a good working relationship with local doctors and the need for local health care, the business began to take hold.

“The people of Ironton and surrounding areas were very receptive to someone trying to start a local business and gracious to let us provide a service,” said Isaac. “Word of mouth spread that we did good work and we began to grow.”

The road began to branch off in other directions. Because of Isaac’s affinity toward athletics, he wanted to expand to the treatment of sports injuries. It wasn’t long after that decision Isaac hired another Ironton native and former linebacker, Dave Coburn, who was a not only a physical therapist but an athletic trainer.

“With Dave on board, we approached Ironton High School. Coach (Bob) Lutz and coach (Mike) Burcham were very supportive of the idea of providing athletic treatment for injuries,” said Isaac. “Being local guys gave us an opportunity to work with their program.”

That was in 1999 and soon the business approached other schools. Coal Grove was next on their list and several other schools have since followed.

“We started to get a reputation for being a sports-centered facility so we started adding more equipment to meet the needs of the athletes,” said Isaac.

Equipment was also added to aid the therapy patients. When patients completed their therapy, they would continue to work with the equipment in the gym area of the facility.

“It really grew. Patients would ask if their spouse or their sister or their son or daughter could come with them. We decided to include a full fitness center and we out grew our facility on Park Avenue and the parking,” Isaac said.

The road then traveled from Park Avenue to the former Burger King building on South Third Street. The business went from 2,000-square feet to 6,000 and the facility has since added an additional 4,000 more square feet.

“The added room has allowed us to expand our services,” Isaac said. “We have a pool with a treadmill for patients with arthritis who can’t do land therapy. We’re also doing more specialized training with athletes.”

The road to Ironton Physical Therapy has since moved in other directions. The business now has facilities in Louisa, Ky., Westmoreland in the Huntington, W.Va., area, Ashland, Ky., and the newest facility in New Boston.

“A lot of physicians approached us about coming their way in Westmoreland. Their said there weren’t any facilities in their area,” Isaac said. “Since then, we’ve had physicians in other areas come to us about the same concerns.”

Since athletics have been a beaten path for Isaac, the facility has sports performance programs such as F.A.S.T. that train in sport-specific areas. The training includes technique and flexibility, not just weightlifting.

Isaac said there are plans to expand the business’ sports programs and other fitness classes.

“We use a screening process to assess the athlete for possible improvement. Some athletes are more susceptible to an ACL tear than others. We also test their core strength,” Isaac said.

“We try to tailor the program to meet their needs and to limit them because of all their insufficiencies. With young athletes, you don’t train everyone the same.”

Now known as Tri-State Rehab Services, Isaac and Castle said the key to their success and expansion has been the company employees.

“Paul and I couldn’t have grown and expanded without tremendous personnel. We’ve been able to find good people who are skilled and with a passion,” Isaac said.

“Dave (Coburn) is the director at the Ironton facility. He’s a key to the growth and success of this office. We wouldn’t be where we are now without him.”

It’s been a long and winding road for Isaac, but it has been a ride he has enjoyed regardless of whatever bumps that have cropped up from time to time.

“To go from a two-man operation to what it is today is a dream come true. I like where we’re going. We’ve got to be proactive. One of the keys is that instead of being followers, we wanted to set the pace,” Isaac said.

“The people of Ironton and surrounding areas gave us a chance and I’m glad for that. Now it’s on me. You can open a business here. People want to stay here. In many ways this is totally different from where we started and from what I intended. I wanted to provide a service. I take pride in being from here.”

The long and winding road led Joe Isaac right back home and is a road he will continue to travel.

N.Y. man unknowingly named after long-dead WWII pilot from Ironton The gravestone he had been searching for was dirty,... read more