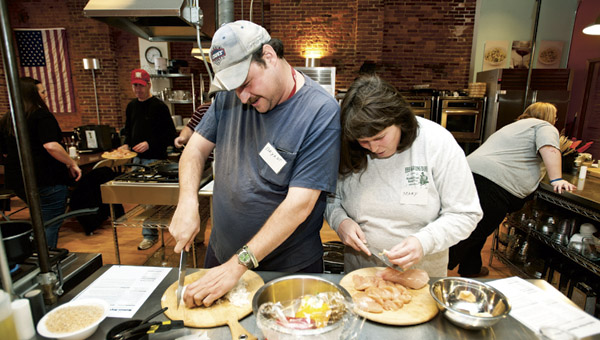 Bryant Harshbarger, left, and Mary Ruth Stephenson, right, work together as they cook up Haitian-style chicken and rice during a cooking class at the Huntington’s Kitchen.

HUNTINGTON, W.Va. — Kristin Wheatley painstakingly grates a carrot against the small side of the square stainless-steel grater. The caution is not so much to ensure the evenness of the carrot, butbecause scraped knuckles can hurt.

“You don’t want pieces of skin in your muffins,” Danny Jarvis, cooking instructor for the day, jokes with his students.

“That’s protein,” one of the fledgling cooks pipes up.

Once a week these nine show up at Huntington’s Kitchen on Third Avenue for the Cooking Matters classes to learn how to eat healthy, but also how to create nutritious food in their own kitchens in a budget-friendly way.

Each week the drill is the same. First the class gets to watch the experts make the recipes for the day. This time it is pineapple and carrot muffins and apple-walnut salad.

Then it is their turn.

The nine head for the stainless steel cooking stations at one end of the one-time storefront that is headquarters of Huntington’s Kitchen now.

Four cooks per station split the chores of chopping, measuring, stirring and wondering if this week’s dish will turn out and if they will like it.

Huntington’s Kitchen is the byproduct of a British chef and nutrition enthusiast who came to West Virginia four years ago claiming Huntington was the unhealthiest city in the United States and ruffling many an Appalachian feather with his bluntness.

Jamie Oliver took that storefront, once a shop for cooking equipment, and turned it into the set for his reality television show, “The Food Revolution.”

After Oliver went back home, Ebenezer Medical Outreach, Inc., took over the kitchen with the simple goal of continuing Oliver’s work, as far as teaching Tri-Staters how to prepare foods from scratch, bypassing the chemicals, fats, salts and sugars found in the easy, but not good for you, frozen dinners and quick meal boxes.

“He did plant the seed,” Ashley Thompson, coordinator for the kitchen, said. “We have taken it to meet what our community needs. We are learning people are wanting to learn to cook with herbs, from scratch and organic.”

That’s where the classes at the kitchen come in and the enthusiasm for them is taking over the Tri-State.

“We are scheduling six to eight weeks out,” Thompson said. “We are getting fuller and fuller.”

Like the hour-long Revolution Solution series on Tuesdays at lunch time.

“It is in a one-hour time frame,” she said. “It offers a healthy lunch alternative.”

One week students learned how to put together a Mediterranean pizza with a side salad, the kind of dish that can keep lunchtime diners out of the fast food line, but not make them feel deprived.

And it is not just the nutritionally curious who show up for classes. Many of the kitchen’s students come there to learn how to cook because it’s doctor’s orders.

“More and more people are coming in here saying ‘I just left my doctor’s and this is the diet I have to follow,’” Thompson said. “They are not trained to cook that way. A lot of our focus is now geared to chronic disease. We teach a perfect portion course for diabetics. The importance of protein, starch, vegetables and whole grains. Then there is a gluten-free course and we host a bariatric support cooking class.”

Then there is the Cooking Matters series in its third year that happens mid-afternoon once a week for six weeks, part cooking class and part nutritional course.

This afternoon one of the students wants to experiment to see what making the muffins with all whole wheat flour will taste like and substitute the five tablespoons of oil in the recipe with yogurt. Her classmates are game, although afterwards they wish they hadn’t made such a gooey pastry.

After the cooking comes the sampling. Then as they are enjoying the fruits of their labor, they get a quick course in nutrition from a dietician from Cabell Huntington Hospital.

The cooking instructor for this series is also a clinical dietician from Cabell. Jarvis was 10 when he started learning his way around the kitchen.

“My mom had to work a lot and my dad didn’t know how to cook,” he said.

“Not having basic information is one of the biggest reasons people turn to the quick and not as healthy prepared foods,” Jarvis said.

“They don’t know how to cook from scratch,” he said. “They’ve not been taught to cook and people are afraid to learn.”

That’s what Jarvis and Thompson want to change.

Before starting the kitchen, Thompson spent about three weeks in England training with Oliver’s food team, churning out four or five recipes a day and learning how to teach them.

“A lot of it is you have to experiment,” she said. “People are intimidated to try herbs and spices. They don’t know what goes hand and hand. It is really easier to buy those already prepared mixes made up from a lot of words you don’t understand.”

But the main lesson Thompson got from Oliver’s course is far simpler.

“Anyone can cook,” she said.