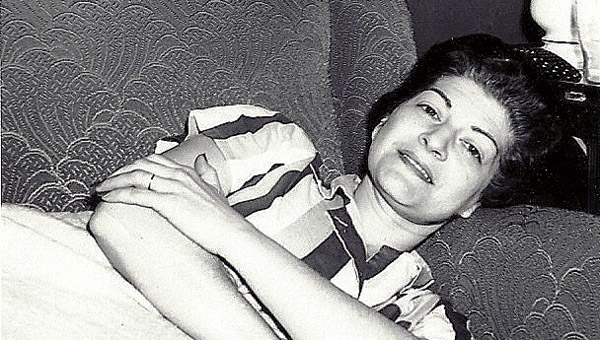 A photo of Betty Workman taken in the late 1950s.

Like many sons, Frank Christlieb possesses an iconic mental picture of his mother as a beautiful, charismatic, intelligent, loving woman. But the formation of that image has been far from typical for the 51-year-old Huntington native with unique Ironton ties.

Frank’s idealized visualization of the woman who once captivated audiences at the Sand Bar lounge in Ironton’s Marting/MacArthur Hotel is pieced together from a handful of snapshots, scratchy audio recordings and second-hand — or even third and fourth-hand — stories gathered through hours and hours of research over the past eight years.

It has been a long, heartbreaking, eye opening and infinitely rewarding journey for Frank — one that isn’t over yet — that has brought him closer to the woman he never got the chance to meet.

“The more I learn about her, the more I want to meet her,” Frank said, adding that his faith tells him he still will one day. “My wife says everything you learn about her, and the type of person she was, is her gift to you.”

This is Frank’s story, but it is very much the story of Betty Workman.

Welcome to the world

On Feb. 28, 1961, Frank Lindsay Christlieb entered the world at Cabell Huntington Hospital, weighing in at 7 pounds and 1.5 ounces.

The son of Clark and Olga Christlieb, his family moved to the Houston area while he was still an infant.

It wasn’t the Norman Rockwell image of growing up. Olga battled personal demons with alcoholism, making the formative years difficult for Frank and his brother.

Two decades after he was born, while studying journalism at Texas A&M, Frank discovered a world-shaking secret: He was adopted.

This explained a lot. Now he knew why the resemblance wasn’t there. It helped him understand his rocky family life and the alienation he sometimes felt.

The perspective change had begun.

“I had a difficult childhood,” he said. “My adoptive family life was difficult, to put it mildly.”

He wanted answers, but life took over.

Frank graduated from A&M, began a successful newspaper career, married and had two children of his own.

It took another 25 years and some short-term turmoil within his adoptive family before he committed to finding his biological parents, specifically his mother.

In 2005, as he was approaching 44, Frank Christlieb knew he had to get serious, that his life wouldn’t be complete if he didn’t do this.

He immersed himself in the search for his mother.

The research was somewhat of a cathartic journey, said Frank. He has written letters to the editor, made hundreds of phone calls, spent years on the Internet. Someday it will be a book.

It was a frustrating and agonizing process.

“I had waited so long to search. I let more time go by,” he said. “The passage of time was making it very difficult.”

Finally, a breakthrough came with a phone call.

A Huntington woman had solved the mystery. Frank Christlieb’s mother was a woman name Betty Workman. But, heartbreakingly, she died 13 years earlier in Huntington.

But the caller had another revelation Frank had never really prepared himself for: Betty had three other children, all alive and well.

It turns out Betty Workman and her husband, Bob, married in Ironton and had three children: Crys, Robin and Teresa.

The very next day, after learning of them, Frank made what he thought would be an awkward phone call to Crys in Colorado.

The rapport was instant.

“It was incredible,” Frank said. “It felt like there was a connection right away.”

The emotions all hit at once, memories of his time in Ironton came rushing back to him.

“I was really happy. My next thought was, ‘My God, I have a brother. I have got to see him,’” Crys said. “I was just overwhelmed. I was nervous. I was excited. I wanted to meet him. I wanted to hug him.”

DNA tests brought more revelations: They all shared the same father, too.

Betty had divorced her alcoholic husband in 1959 but then conceived a fourth child with him about a year after the divorce, at the age of 39.

She told her three children that she had lost the baby and they lived more than 40 years without knowing the truth.

Crys will turn 69 on Feb. 28 — coincidentally sharing a birthday with Frank who will turn 52. Robin Workman passed away four years ago at the age of 61. Teresa Workman is 58.

Crys especially remembers their time in Ironton. He was a junior in high school. When Betty was about six months pregnant the family moved back to Huntington, but Crys stayed behind and lived with the Lawless family for the next few months so he could continue to play for the IHS varsity basketball team.

“I loved the town. I helped decorate the town that fall for Christmas,” he said. “I loved the small-town atmosphere and that everyone knew everybody.”

Everything his new siblings told him was enlightening, but Frank later provided them something they didn’t know about the father no one had seen in decades.

Frank learned that Bob Workman moved to Tampa sometime in 1960 where a tragic life turned worse. He became homeless and drowned in July 1962 in the Hillsborough River after an altercation with another homeless man.

Although the research before and after meeting his siblings has added depth and details, nothing could compare to the stories they told and the fact they think Betty would have appreciated the reunion.

“The kind of person she was, she would have been very happy,” Crys said. “Frank is like her. He would do anything for anybody.”

Finally, after more than four decades, Frank Christlieb began to know his mother.

Betty Louise Campbell was born in July 1921 in Huntington. Much of her early years have been lost to time, but she was considered a raven-haired beauty with a singing voice that stood out.

That love for music likely drew the teenager to Bob Workman, a Navy man who was five years her senior but was known to be a guitar player. The couple married in Ironton in 1939 and they soon began raising a family in Huntington.

The fledgling family was doing OK, with Bob and Betty playing music locally. They lived in Logan for a few years.

But Bob’s battles with alcohol were never far from the surface, Frank said, and the home deteriorated. Just before Christmas in 1954, the couple welcomed their third child, Teresa.

Things continued to get worse.

Although the good times may have been good, the bad times were punctuated with emotional and physical abuse, Frank said.

Finally, Betty had had enough. The divorce was official in April 1959.

But something must have happened. Whether it was an attempt at reconciliation or just one night of an attempt to rekindle what they once had, Frank was conceived in 1960.

“My siblings and I theorize that, at some point, Betty found out she was pregnant, and, fearing that Bob might do something drastic if he found out about the pregnancy, we strongly believe she was trying to protect me,” Frank wrote in an email. “And that’s why she packed up the kids and moved out of Huntington for awhile.”

That was how Betty Workman ended up in Ironton in the summer and fall of 1960, working at the Marting/MacArthur Hotel waiting tables and singing at the hotel’s Sand Bar with a small dance band called the Harry Ware Trio.

For Frank, hearing recordings of his mother — as well as singing along and dancing to them — has brought them closer together and conjured images of “might have beens” and of opportunities missed.

“She could have made it big at some point if she had the chance,” he said.

But during these few months of 1960 — about June to November — she was pregnant with him. The family lived in an apartment above the old Anderson’s Super Market at 420 S. Third St.

Crys remembers quite a bit about their brief time in Ironton and said he once went to the hotel and watched Betty rehearse with the band.

“The more I learned about her the more real she became,” Frank said. “I think she was a wonderful person. Everyone I talked to had such wonderful things to say about her, about how she treated people.

“I think she was the kind of person who could help people who had problems. She always had a smile on her face, always laughing. No matter what was going on in her life, she was always upbeat.”

She became Betty Cazad when she remarried in July 1971. Much like the early years of Betty’s life, the latter stages were filled with challenges and heartbreak.

Even though she had quit, years of smoking eventually caught up with Betty.

Betty Workman Cazad died of lung cancer in December 1992 in Huntington. She is laid to rest in Ridgelawn Cemetery on Route 60.

Although he now feels as if he knows a mother he never got to meet and enjoys a relationship with his long-lost siblings, Frank Christlieb’s research continues.

Writing that book remains on the horizon. The format is still to be determined, but one thing is certain: He will collaborate with Crys on it.

“Everyone who has been adopted or put a child up has a story,” Frank said.

New information comes slow, but each piece illuminates new facets of his birth parents, he said.

Just in the past few weeks, he found some people who worked with Bob Workman at a business in Huntington in the 1950s.

The Ironton aspect of his research remains the most challenging. He has recently spoken to a few Ironton old-timers, in addition to recently sending emails to some 1950s IHS grads to see if they might have seen Betty at the Sand Bar or elsewhere.

“I think it is pretty much a situation where most of the people who would’ve crossed paths with Betty, in Ironton during the five or six months in 1960 she lived there with my older birth siblings, have either passed away or moved away.”

As the book continues to take shape, Frank has taken to other creative avenues to tell the story and further connect with his mother.

“My heart aches over the burden you carried all those years after you lost me. I know you couldn’t have supported a fourth child. But I believe with all my being that you were also determined to protect me from my father. I’m grateful for the steps you took to keep all of your children safe,” Frank wrote in a column published in The Dallas Morning News. “It hurts me to know of your suffering and how unfair much of your life was. But it is heartening to learn you never stopped being the Betty everyone adored. Although, sadly, I didn’t find you in time, I did — in the character you instilled in my siblings.”

So Frank will keep working on his research, painstakingly recreating the details of the life of a woman who he now knows and also knows he will meet, one day.

Did you know Betty?

Frank Christlieb continues the search for people who knew his mother, Betty Workman, during her time in Ironton in 1960 or those who visited The Sand Bar in that era. Anyone with information can contact him at frank.christlieb@yahoo.com or (817) 995-1914.