Bring on the show 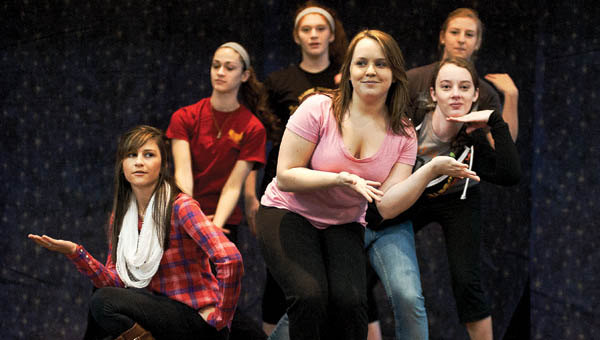 Sophomores from St. Joseph High School perform the theme from “Cabaret” as part of this year’s Variety Show.

From the sounds of 1950s Doo-Wop to the ballads that make Broadway shine, this year’s St. Joseph High School Variety Show has it all.

Scheduled for Friday and Saturday nights the annual event has been a labor of love for students and faculty who chose as its theme “A Day at the Joe.”

“It is a collaboration of our performing arts class and the entire student body,” Maria Whaley, director of the show, said.

Putting on the show takes weeks of preparation starting with classes where performing arts teacher John Lutz teaches his students about scripts, musical numbers and all aspects of performance.

Then the students take that knowledge and run with it, creating their own script, choosing what songs they want to present and the kind of dance routines they want to have choreographed.

Then Whaley, founder of the Ashland Youth Ballet, dons her choreographer’s hat to come up with routines and polishing dance and musical numbers.

“We have pretty much three-fourths of the student body involved in the show in some way,” she said. “At one point we will have 40 kids dancing. We have an opening number that is old-time rock and roll that involves the entire chorus and dance cast.”

Then there is a modified version of the theme song from the 1960s Broadway musical, “Cabaret” and a number of ballads. Besides getting a taste of the performing life, students learn some intangibles.

“They get a sense of camaraderie,” Whaley said. “They learn to give and take, learn how to solve a lot of problems and issues because our gym is not the ideal performance location. They have a lot of fund singing, being together and building a very strong bond. It is a very strengthening experience for them.”

Friday night’s show starts at 8 p.m. On Saturday a pre-show dinner starting at 6:30 p.m. will be offered with the show at 8 p.m. The menu will be opened face roast beef sandwiches, mashed potatoes, vegetables, cole slaw, dessert and drink. Tickets for the show are $5 for each night and dinner is $15. Reservations for the dinner must be made by Tuesday by calling the school at (740) 532-0485.

Collier to be honored by GOP